You are here: Home / Senza categoria / 5 facts about Sunnis and Shiites that help make sense of the Saudi-Iran crisis 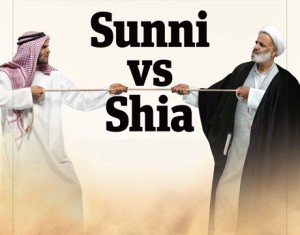 The execution of   Shiite cleric Nimr Baqr al-Nimr by Saudi Arabia has sparked a furor in the Middle East along sectarian lines. In Iran, the regional Shiite superpower, the Sunni embassy was ransacked and burned. The Saudi kingdom and a number of its Sunni allies have cut or downgraded diplomatic relations with Tehran. In a number of Sunni-majority states, members of the Shiite minority have taken to the streets to protest Nimr’s death.

The events seem to be a worrying escalation of the sectarian rhetoric that has blighted the Muslim world in recent years and helped worsen conflicts in places like Syria, Iraq and Yemen. While it’d be very wrong to lay all the blame at the religious schism that split the Sunni  and the Shiite Muslims nearly 14 centuries ago, it’s hard to deny that the current divide reinforces a lot of other rivalries and disputes – and is perhaps even exploited by some to further other aims.

The split between Sunni and Shiite Islam took place  in 632 A.D. after the death of the Islamic prophet Muhammad, who is regarded by non-Muslims as the founder of the religion.

The dispute arose over a disagreement over who should succeed Muhammad as the caliph of Islam: Sunnis believed that Abu Bakr, the father of Muhammad’s wife and a personal friend, should lead Muslims due to a consensus among the Muslim community. Shias believed that Ali ibn Abi Talib, Muhammad’s cousin and son-in-law, was chosen by Muhammad to be his successor.

This initial dispute set off a longer conflict about who should lead the Islamic community, with Sunnis believing that Muslim leaders should be chosen from those qualified, while the Shiite Muslims believing they should follow Muhammad’s bloodline. While Ali did eventually become the fourth caliph, he was assassinated and his son was killed. Shiite Muslims consider him the only legitimate caliph, while Sunnis consider the successive caliphates claimed by dynasties like the Umayyads, the Abbasids and the Ottomans as legitimate.

The way the two groups view themselves is shown in their names. The word Sunni comes from “Ahl al-Sunnah” or the “People of the Path,” suggesting that they follow the traditions set by Muhammad’s teachings and habits. Shiite comes from “Shi’at Ali,” which means the “Party of Ali” and suggests their link to Muhammad’s blood lineage.

Today around 1 in 10 Muslims are Shiites

Shiite Islam began as a movement within the broader Islamic community and it remains a minority today. Exact estimates are hard to come by (in part due to political concerns in a number of countries), but in 2009, Pew Research estimated that around 10 to 13 percent of the world’s Muslim population was Shiite and around 87 to 90 percent were Sunni.

Pew found that the majority of Muslims lived in just a few countries: Iran, Pakistan, India and Iraq. In Iran, a country with a population of about  77 million, it’s thought that as much as 95 percent of the Muslim population might be Shiite, meaning that more than a third of the global Shiite population may live in the country. Meanwhile, many other countries have large Sunni majorities, including Egypt, Jordan and Saudi Arabia.

A number of key nations in the Middle East are relatively split. Yemen is estimated to be as much as 40 percent Shiite, for example, and Shiite Muslims make up around 45-55 percent of the population in Lebanon. Demographics do not always result in control of political leadership, however. The majority of Syria is Sunni, yet Syrian President Bashar al-Assad and his late father were members of the Shiite Alawite sect. The Bahraini leadership are Sunni, but the majority of the Bahraini citizenship is Shiite. Iraq is majority Shiite too, but was ruled by the Sunni dictator Saddam Hussein for decades.

The split between Sunnis and Shias is often compared to the split between Catholicism and Protestantism within the Christian Church. It’s an imperfect comparison but it is useful in some ways, as it shows how two religious sects can come to differences over the interpretation of the same source materials – and how arguments over religious doctrine and leadership can eventually turn into political violence.

Both Sunni and Shiite Muslims accept the Koran and the teachings of the Prophet Muhammad as the basis of their religion. Many of their traditions are the same: They fast during Ramadan and make the pilgrimage to the holy city of Mecca. However, their views on how to follow the faith do have some notable differences. Sunnis tend to focus more on interpreting Islamic scripture, for example, while Shiites follow the guidance of religious leaders.

Neither the Sunni nor the Shiite Muslim communities are monolithic, however. Within the Shiite community there are a variety of different branches, most split among their beliefs about who came to lead Islam after the death of Ali. For example, the largest branch are known as “Twelvers,” as they believe that there were 12  leaders, known as imams, after Muhammad. There are a number of different schools of thought within Sunni Islam, mostly with different views on interpreting Islamic law.

It’s also worth noting that there are other Islamic communities outside of the broad Sunni and Shiite delineation. Sufism, a branch of Islam that emphasizes the spiritual and mystical elements of the faith, has links to both Sunni and Shiite communities. Another school of Islam predominant in Oman, the Ibadi movement, is said to predate both the Sunni and Shiite schools.

The schism between the Sunni and Shiite movements began in a bloody way, with Ali Ibn Abi Talib murdered and his successor killed and beheaded in battle. Over the years that followed, the Shiite minority was sometimes persecuted by Sunni authorities and vice-versa. Later, as the Safavid dynasty established Shia Islam as the state religion of Persia, it came into conflict with the Sunni caliphate then based in the Ottoman empire.

However, portraying the rivalry between the two groups as a constant clash would be deeply misguided. In many places, Sunni and Shiites lived happily together, intermarrying and sharing places of worship. And besides, where there were clashes with each other there were also clashes with other religions during these periods – and as others have noted, there was never a  war between Sunni-Shiite  with the ferocity of the Thirty Years War between different Christian movements (estimated to have left as many as 8 million dead).

The split between Sunni and Shia was also weakened in the early 20th century by growing Arab nationalist movements. The Ba’ath movement, which went on to dominate both Iraq and Syria through separate political parties, emphasized nationalism and socialism over religious divides.

Its resurgence is largely driven by politics

It’s easy to look around the Muslim world now and see it divided along sectarian lines. The spat between Saudi Arabia and Iran over the death of Nimr is really just the latest issue. There’s the civil war in Syria that largely pits Sunni forces against Shiites. There are similar divisions along sectarian lines in Yemen’s fighting. Iraq’s political paralysis is in large part due to Sunni-Shiite violence and mistrust. In Pakistan and Afghanistan there remains deep tension between the Shiite minority and Sunni extremists.

Many trace these tensions back to 1979 and the Iranian revolution that installed an Islamic republic in the country, led by the Grand Ayatollah Khomeini. That movement was threatening to many Sunni powers in the region, not only because it was Shiite-led: The Ayatollah espoused a fiercely anti-American rhetoric that put him at odds with U.S. allies like Saudi Arabia. And perhaps more importantly, it was a major Middle Eastern country where religious leaders now held political power, potentially providing a model for Sunni   Islamist movements all around the Muslim world.

The Iranian government also quickly proved itself willing to support Shiite movements around the world, often with violence. It is believed to have offered significant amounts of funding and training to Hezbollah in Lebanon and later various Shiite militia in Iraq. Things stepped up after the attacks in New York City on Sept. 11, 2001. The invasion of Iraq in 2003 and the Arab Spring that began around seven years later also ended up pushing Sunnis and Shiites into further conflict.

The Islamic State, an extremist organization loathed by both Sunni and Shiite powers, has wedged itself into the middle, with leader Abu Bakr al-Baghdadi not only proclaiming himself successor to the Sunni Ottoman caliphate but also claiming a blood tie to the prophet Muhammad, apparently an attempt to appeal to Shiites.

As Marc Lynch of George Washington University noted in 2013, it often appears that sectarianism was being exploited for political gains. That appears to be the case again now, with Saudi Arabia opening up a Sunni front against Iran after coming under pressure economically and geopolitically. Many of the big conflicts in the Middle East right now don’t really seem quite so sectarian when examined closely. The Syrian war began as an attempt to oust an Arab nationalist dictator. The Houthi rebels in Yemen may be Shiite but they are part of the Zaydi minority, which is theologically closer to Sunni Islam than other Shiite movements, and seem to have been initially motivated by local concerns about the government. Egypt and Libya may be facing powerful Islamist insurgencies, but it has little to do with their Shiite populations, whose size is negligible.

Nimr Baqr al-Nimr, the relatively little known Saudi Shiite cleric whose execution has sparked the latest tensions, himself appeared to downplay the importance of sectarianism in a 2008 meeting with U.S. officials, saying that he only wanted to side with “the people” against the government, according to cables leaked by WikiLeaks.