Clashes in southern Sulu province leave nine others injured including two soldiers, according to a military chief 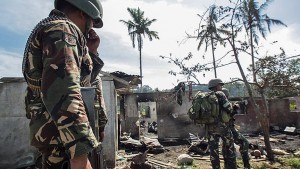 At least five Daesh militants were killed in a series of clashes with military forces in southern Philippines early Tuesday, an army official said to aa.com.tr.

The military continues to intensify the conduct of focused operations against the Abu Sayyaf members who are responsible for the series of kidnappings and atrocities in Sulu.

Misaya is under Sulu-based Abu Sayyaf top leader Radullan Sahiron, who is wanted by the US government with a $1 million bounty on his head since involvement in kidnapping of US tourists in 2001.

Authorities tagged him as one of Abu Sayyaf sub-commanders who have seized 25 Indonesians, at least four Malaysians in a series of kidnappings in the Sulu and Celebes seas last year.

The military also blamed Misaya for the beheading of one Malaysian hostage, after negotiations failed for his release.