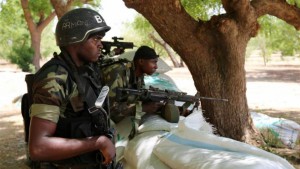 The bodies, equipped with rocket launchers, were found in Afade, a town in Cameroon’s Far North Region neighboring Nigeria.

One army source told Xinhua over phone that this had come after around 10 militants on motobikes burned a school and attacked the home of a local leader with grenades Saturday night.

The attackers were defeated after a violent exchange of fire with Cameroonian army with several militants killed and some others wounded, the source said, adding there were no casualties from the side of the Cameroonian army.

The suspected Boko Haram on Saturday also attacked two large trucks near the town of Mora in Far North Region. One of the trucks carrying cement was burned and the other was taken away with the driver and his assistant on board by the attackers.