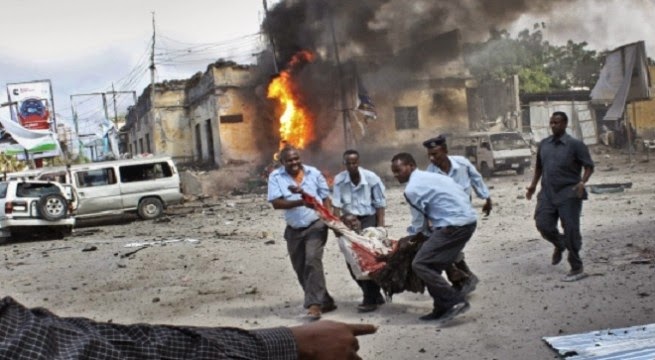 The attack, which bore the hallmarks of the al-Qaeda-affilated al-shabaab rebels, hit the gate of a hotel commonly used to host visiting dignitaries and came on the eve of a visit to the city by Turkish President Recep Tayyip Erdogan.

“There was a heavy explosion and at the gate of the SYL hotel. It was a car bomb explosion,” Somali police official Mohamed Adan said.

Witnesses said they saw a car speeding towards the gate of the hotel, and reported a massive explosion.
“I saw the speeding along the main road and the driver turned into the Hotel SYL gate. There was huge explosion, smoke and shrapnel. Several people were down on the ground, I don’t know if they were dead,” said an eyewitness, Abdukadir Munin.

The attack comes even though Mogadishu, and particulalry the area around the presidential palace, has been placed under extra-tight security ahead of Erdogan’s visit.

There was no immediate claim of responsibility, although al-Shabaab rebels — who are fighting to overthrow the country’s internationally-backed government — have carried out a string of attacks against high-profile targets in Mogadishu.