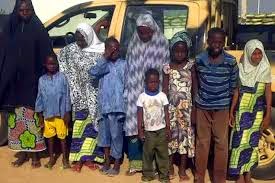 The Nigerian jihadist group Boko Haram has abducted between 350-500 people from the northeast Nigerian town of Damasak, Borno state, according to a report by Reuters. The abduction follows news of Nigerian officials liberating a new town while the terror group lost two female suicide bombers to a premature detonation.

Reuters reports that the exact number of those abducted from Damasak remains unknown, but residents reported Tuesday that the terror group stormed the town and “kidnapped more than 400 women and children.” One witness told Reuters that Boko Haram “took 506 young women and children,” though fifty were killed before they left the town.

Damasak had been under the control of Boko Haram for almost five months before Chadian and Nigerien troops liberated it in March. The town was attacked, though not recaptured, today, as troops waiting for Nigerian forces to arrive analyzed the damage done to the area.

Boko Haram reportedly killed hundreds in their attempt to solidify their presence in Damasak. Following the end of their occupation of the town, the coalition forces that had taken it over discovered a gigantic mass grave under a bridge in the town where at least 100 bodies are believed to have been buried. Blood stained the side of the bridge, indicating that the bodies–most found with their throats slit–were tossed down to the grave from the bridge.

On Saturday, coalition troops warned that the Nigerian forces controlled by President Goodluck Jonathan had not made any indication that they were going to return to Damasak and secure it from further Boko Haram attack. Three days later, the group swept the town, though they do not have a presence there as they did before coalition troops removed them.

Boko Haram has begun using its captives as suicide bombers, particularly young women. The need for more captives was made clear by the failure of two female suicide bombers on Sunday, who had allegedly prepared to attack a market in Maiduguri, the capital of Borno, on Monday.

According to Nigeria’s Pulse, the two attackers, both young women, died when their explosives detonated on their persons on Sunday afternoon, far from any target they could have been planning to attack. One witness stated,  “The suicide bombers were said to have been brought from Damaturu by one suspected Boko Haram terrorist, who dropped them in Jakana and told them to take a bus to the next town.” The girls were asking about the weekly Monday Market in the capital, the witness added.