You are here: Home / Senza categoria / Libya: 2 suicide bombs in Leithi “in revenge for Bouka death” 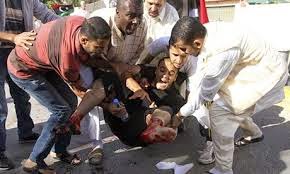 Two explosions, said to be suicide bombs, are reported to have killed six member of Libya National Army in Benghazi’s war-torn Leithi district.

Twenty others are reported injured. The explosions occurred early this evening.

“The blasts were a huge,” a resident in nearby Hay Zawia (formerly Hay Al-Fatah) told the Libya Herald.

According to Al-Nabaa TV, Benghazi Revolutionaries’ Shoura Council (BRSC) has claimed the bombings were in revenge for the death of Bouka Al-Araibi, killed yesterday.

The BRSC includes Ansar Al-Sharia but until now it had not thought to include fighters belonging to the Islamic State (IS).

However, suicide bombs are part of IS tactics (but generally not of Ansar) and it has claimed that Bouka had joined them.

Also, Ansar is reported not to be fighting in Leithi any longer and to have left the battle there against the LNA and Operation Dignity to IS.

The LNA have been slowly gaining territory in Leithi, almost all of whose residents have fled the area.
There is no confirmation yet that the explosions were suicide bombs. They could have been bobby traps, another IS tactic.

There are also unconfirmed reports that those killed and wounded had been attending a military meeting in Leithi.

BMC and Jelaa have put out an urgent call for doctors and other medical staff to report for duty, saying that the wounded are in critical condition.