You are here: Home / Senza categoria / Saudi Arabia is moving heavy military equipment including artillery to areas near its border with Yemen 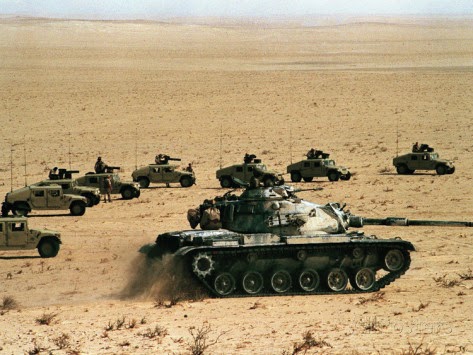 Saudi Arabia is moving heavy military equipment including artillery to areas near its border with Yemen, US officials said on Tuesday, raising the risk that the Middle East’s top oil power will be drawn into the worsening Yemeni conflict.

The build-up follows a southward advance by Iranian-backed Houthi Shi’ite militants who took control of the capital Sanaa in September and seized the central city of Taiz at the weekend as they move closer to the new southern base of US-supported President Abd-Rabbu Mansour Hadi.

The slide towards war in Yemen has made the country a crucial front in Saudi Arabia’s region-wide rivalry with Iran, which Riyadh accuses of sowing sectarian strife through its support for the Houthis.

The conflict risks spiraling into a proxy war with Shi’ite Iran backing the Houthis, whose leaders adhere to the Zaydi sect of Shi’ite Islam, and Saudi Arabia and the other regional Sunni Muslim monarchies backing Hadi.

The armour and artillery being moved by Saudi Arabia could be used for offensive or defensive purposes, two US government sources said. Two other US officials said the build-up appeared to be defensive.

One US government source described the size of the Saudi build-up on Yemen’s border as “significant” and said the Saudis could be preparing air strikes to defend Hadi if the Houthis attack his refuge in the southern seaport of Aden.

Another US official, speaking on condition of anonymity, said Washington had acquired intelligence about the Saudi build-up. But there was no immediate word on the precise location near the border or the exact size of the force deployed.

Hadi, who supported Washington’s campaign of deadly drone strikes on a powerful al Qaeda branch based in Yemen, has been holed up in Aden with his loyalist forces since he fled Sanaa in February. On Tuesday, forces loyal to Hadi drove Houthi fighters from two towns they had seized hours earlier, residents said, apparently checking an advance by the Shi’ite fighters towards Aden.

Saudi Arabia faces the risk of the turmoil spilling across its porous 1,800 km (1,100 mile)-long border with Yemen and into its Shi’ite Eastern Province where the kingdom’s richest oil deposits lie.

“The Saudis are just really deeply concerned about what they see as an Iranian stronghold in a failed state along their border,” US Ambassador to Yemen Matthew Tueller told Reuters on Monday at a conference hosted by the National US-Arab Chamber of Commerce in Washington.

But a former senior US official, speaking to Reuters on condition of anonymity, said the prospects for successful external intervention in Yemen appeared slim. He said Hadi’s prospects appeared to be worsening and that for now he was “pretty well pinned down.”

Riyadh hosted top-level talks with Gulf Arab neighbors on Saturday that backed Hadi as Yemen’s legitimate president and offered “all efforts” to preserve the country’s stability.

Saudi Foreign Minister Saud al-Faisal said on Monday Arab countries would take necessary measures to protect the region against “aggression” by the Houthi movement if a peaceful solution could not be found.

In March 2011, Saudi troops, along with those from the United Arab Emirates, entered neighboring Bahrain after weeks of protests by that country’s Shi’ite majority that Riyadh feared could lead to an expansion of Iran’s influence.

A spokesman for the Saudi embassy in Washington did not immediately respond to a request for comment on any military movements.

Yemen asked the United Nations Security Council on Tuesday to back military action by “willing countries” to combat Houthi militias, according to a letter from Hadi seen by Reuters.

Hadi wants the 15-member body to adopt a resolution that would authorize “willing countries that wish to help Yemen to provide immediate support for the legitimate authority by all means and measures to protect Yemen and deter the Houthi aggression.”

Fighting has spread across the Arabian peninsula country since last September when the Houthis seized Sanaa and advanced into Sunni Muslim areas.

US officials said on Saturday that the United States had evacuated all its remaining personnel in Yemen, including about 100 special operations forces, because of the security situation. The end of a US security presence inside the country has dealt a blow to Washington’s ability to monitor and fight al Qaeda’s Yemen affiliate.

However, US officials have said that Iranian backing for the Houthi rebels has been largely limited to funding. They say Iran has its hands full providing armed assistance to its allies in Syria and Iraq.