You are here: Home / Africa / ISIS reaches out to Somali terror group Al-Shabaab 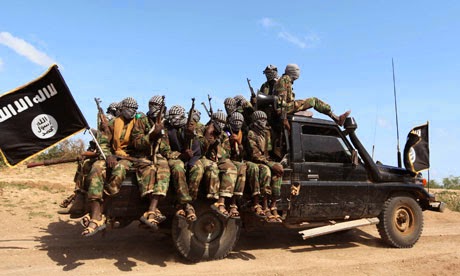 It has long been feared that ISIS could ally with Somali terror group al-Shabaab, which has been tied to al-Qaeda. As Osama bin Laden’s gang fades and the Islamic State rises, ISIS might look like a better partner for the Somalian militants. ISIS recently accepted an oath of fealty from Boko Haram in Nigeria.

Last October, the United Arab Emirates warned that the Islamic State might be interested in a similar arrangement with al-Shabaab, a prospect the UAE foreign minister described as frightening given his nation’s sizable Somali population.

In the United States, Minnesota has dealt with a wave of Somali-Americans running off to join al-Shabaab. Last month, the Somali terror gang released a video urging Muslims living in the U.S., U.K., and Canada to stage shopping mall massacres like the one it perpetrated at the Westgate Mall in Kenya. Some of the al-Shabaab operatives involved in that slaughter were Somali-American expatriates.

According to a report at Al-Jazeera, an ISIS emissary sent a message to Somalia shortly before Boko Haram bent its knees to the caliphate, inviting the “emir” of al-Shabaab to do likewise. The message praised al-Shabaab as “brothers in Somalia” and called on them to launch attacks “inside Kenya, Tanzania, and Ethiopia.”

An alliance could prove useful for ISIS, as al-Shabaab is said to be doing brisk recruiting business in those African nations, using “slick recruitment videos and magazines” which “play upon the marginalization of Muslims and show details of high-profile attacks in Kenya.”

Al-Shabaab has also been playing off the alleged excesses of Kenyan anti-terrorism forces, and the death of a few high-profile terrorist leaders. One bit of propaganda deployed by an underground group allied with al-Shabaab suggested to Somalian jihadis looking for bloody adventure in Kenya that “paradise is just a taxi ride away.”

There seems to be a power struggle within al-Shabaab, with some of the players seeking to honor their existing commitments to al-Qaeda, while others think it would be better to line up with the hot new kids on the head-chopping block in ISIS.

“None of this bodes well for East Africa, which could either see an influx of foreign fighters if ISIL gains a foothold, or increasing links to al-Qaeda in the Arabian Peninsula as Yemen becomes more unstable,” speculates Al-Jazeera.