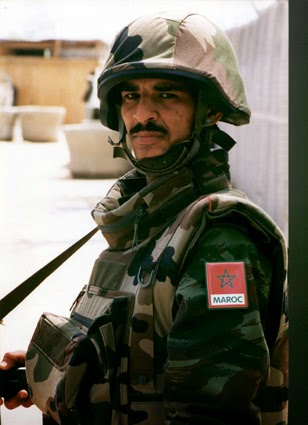 Moroccan authorities said a “terrorist cell” they dismantled had brought in arms through the Spanish enclave of Melilla to carry out attacks for the Islamic State (ISIS) jihadist group.

The cell was made up of 13 members aged between 19 and 37, most of them without primary school education, said Abdelhak Khiame, head of Morocco’s newly-formed judicial investigations agency.

He told reporters that 440 rounds of ammunition, six pistols, 31 handcuffs and electronic gear were seized at a cache near Agadir in southern Morocco.

The weapons had transited through Melilla, one of two Spanish enclaves in the north of Morocco, Khiame said.

String of assassinations
Moroccan authorities had been watching the suspects for over five months, he said, but it was not yet clear if they were linked to cells in Europe.

Spain says it has dismantled several networks, particularly in Melilla and its other North African enclave, Ceuta, recruiting fighters for the Islamic State.

The two enclaves, the only land borders between Africa and Europe, attract thousands of mostly sub-Saharan Africans trying to reach European countries.

The interior ministry said on Sunday the Moroccan cell was dismantled in a nationwide operation and that the arms seized were to have been used for a string of assassinations.

Large amount of ammunition
The announcement followed last Wednesday’s attack on the national museum in the capital of fellow North African state Tunisia, claimed by ISIS, that killed 20 foreign tourists and a policeman.

Raids were carried out in several cities including Agadir, Marrakesh in the south, Boujaad in the centre, Tangiers in the north, Ain Harouda near Casablanca and in the Western Sahara.

“Firearms and a large amount of ammunition” to be used “to assassinate political, military and civilian figures”, were seized near Agadir, the ministry said, quoted by the official MAP news agency.

It said members of the dismantled network had pledged allegiance to IS and vowed to target the Moroccan security forces and send recruits to fight in Syria and Iraq.

According to official figures, between 1 500 and 2 000 Moroccans are fighting or have fought alongside jihadists in Iraq and Syria as well as in Libya.