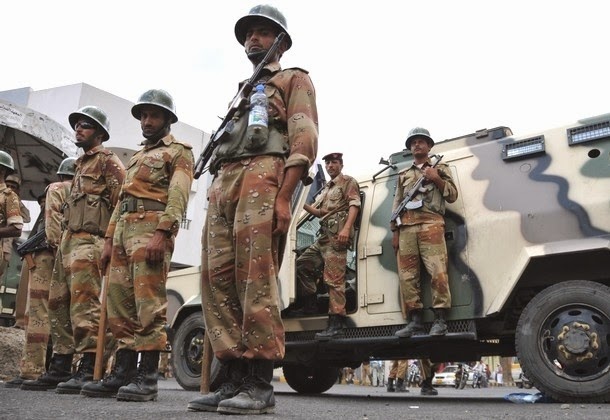 Yemen’s embattled president asked the UN Security Council to authorize a military intervention in support of his government to oust Houthi Shiite rebels who control much of the disintegrating country’s north and are advancing south.

President Abed Rabbo Mansour Hadi said in a letter to the council obtained Tuesday by The Associated Press that he had also asked members of the six-nation Gulf Cooperation Council and the Arab League to immediately provide “all means necessary, including military intervention to protect Yemen and its people from the continuing Houthi aggression.”
Hadi, the country’s internationally recognized leader and a key U.S. ally, asked the Security Council to approve a resolution that can be militarily enforced under Chapter 7 of the UN Charter.
The Houthis seized the capital Sanaa in September and have been advancing south alongside forces loyal to former President Ali Abdullah Saleh, who stepped down in 2011 as part of a US-backed, Gulf-brokered deal after months of protests against his rule. The rebels have recently closed in on the southern port city of Aden where Hadi fled and is now based.
Hadi said a Security Council resolution should invite willing countries to immediately support Yemen’s legitimate government “by all means and measures, to protect Yemen and deter the Houthi aggression expected to occur at any hour from now against the city of Aden” and other cities in the south.
Military convoys are heading to attack Aden and the south, Hadi said, and Yemeni air force jets controlled by the Houthis are continuing to fly and bomb Aden “in a very alarming and dangerous” way.
Hadi also said Yemen’s missiles have been looted, and asked the Security Council “to control the missile capability looted from the legitimate authority or assign a neutral country to monitor it.”
He said all efforts at a peaceful settlement have been rejected by the Houthis whose goal is to control the country.
“The Yemeni people have never faced such heinous aggression,” he said. “The threats posed by the Houthis are not targeting the security of Yemen but the regional and international peace and security.”
The Houthis are members of the Shiite Zaydi community, which makes up around a third of Yemen’s population and is concentrated in the north. Their opponents view them as a proxy of Shiite Iran, charges the Houthis deny.
The turmoil has undermined Yemen’s ability to combat al-Qaeda in the Arabian Peninsula, the target of a US drone program, and the country now also faces a purported affiliate of the extremist Islamic State group, which claimed responsibility for a series of suicide bombings killing at least 137 people last Friday.
Hadi also asked the Security Council to help Yemen face al-Qaeda and Daesh, the Arabic acronym for the Islamic State group.