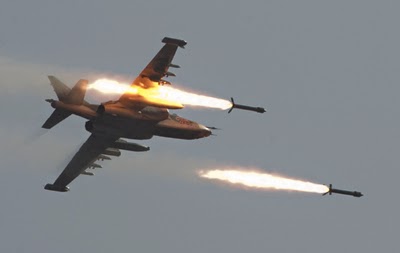 Libyan pro-government forces said Monday they had targeted a weapons depot belonging to an Islamist-backed militia, as peace talks continued in Morocco.

Military spokesman Colonel Ahmed al-Mesmari said “the air strike targeted a weapons storage facility belonging to Libya Dawn” in Tarhuna, some 80 kilometres (50 miles) southeast of Tripoli.
Libya Dawn is a militia alliance that includes Islamists and has installed a rival government and legislature in opposition to the country’s internationally recognised government.
A spokesman for the group denied any of its weapons were in the area.
“Eight Libyan civilians died in the strike. Sadly this is their strategy, to kill civilians and claim to the international community that they are after weapons,” he said, referring to the Western-backed government.
Mesmari said that after the air raid members of Libya Dawn attacked the house of a military officer and “killed his wife, his daughter, his son, his brother and other people who were there” in retaliation.
The Islamist group denied the claim.
Mesmari meanwhile said that pro-government forces had shot down a Libya Dawn plane at Ar-Rajban, some 170 kilometres (105 miles) southwest of Tripoli.
The Libya TV channel reported that pro-government forces had captured one of the pilots and another had died at the scene.