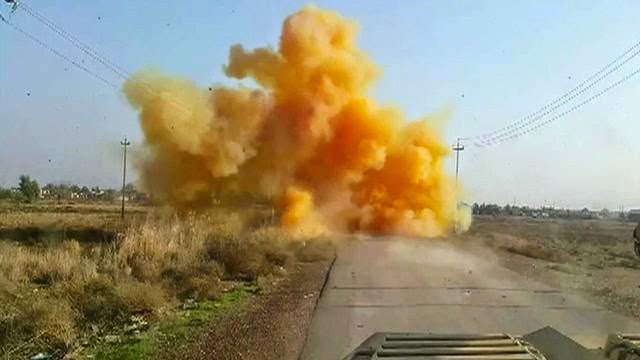 Egypt provided the United States with information that ISIS is attempting to purchase chemical materials such as chlorine gas that can be utilized in terrorist attacks, an Egyptian intelligence official told WND.
Yet the official claimed the U.S. has been “ignoring” the intelligence as well as information ISIS has already utilized chlorine gas in attacks against Kurdish forces in recent weeks, including in battles in Tikrit, Iraq.The developments came after a British chemical weapons expert who advised security forces in Baghdad issued a warning that returning ISIS fighters could purchase chemical materials and carry out attacks against civilian targets in the U.S. or U.K.

“The analysis, which was carried out at an EU-certified laboratory, found the samples contained levels of chlorine that suggested the substance was used in weaponized form,” Kurdish officials wrote in a statement released to the news media.

The Kurdish claim was not independently verified.The Kurdish group further claimed Peshmerga forces discovered “20 gas canisters” in the back of a truck used in an ISIS suicide bomb attack in Iraq on Jan. 23.

Kurdish forces released video and photos purporting to show an exploding truck storming down a road leaving a trail of orange smoke, a sign of chlorine gas.

One Kurdish official told reports that “dozens” of Peshmerga fighters were treated for “dizziness, nausea, vomiting and general weakness” after the attack.

Last week, a chemical weapons expert warned ISIS militants returning from fighting overseas could carry out chemical attacks inside the U.S. or U.K., perhaps on transportation infrastructure or at a sports stadium.

Hamish de Bretton-Gordon, a former commanding officer at the Joint Chemical Biological Radiological Nuclear Regiment, warned, “It is very evident that ISIS are putting much time and effort into training its jihadis in the use of chlorine as a terror weapon and in particular in IEDs (improvised explosive devices).”

Writing at 2paragraphs.com, Bretton-Gordon continued, “Virtually every foreign jihadi who returns to the U.S. or U.K. will have been exposed to training of this sort and will have a reasonable idea on how to use chlorine and other toxic chemicals as a terror weapon.”

Bretton-Gordon pointed out that in the U.K. at least, up to 90 tons of chlorine can be purchased without a license.

When he returned earlier this month from advising security forces in Baghdad, Bretton-Gordon told the London Daily Mirror newspaper that a chlorine gas attack within the U.K. was “highly likely.”

“This could happen on a train or tube or even at a big football match.”