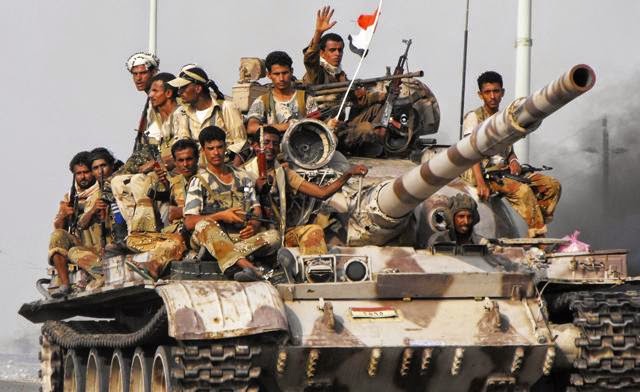 Yemen’s President Abed Rabbo Mansour Hadi on Monday asked the United Nations to impose a no-fly zone from the airports seized by rebels, as well as urging Gulf Arab countries to intervene militarily against Houthi fighters.

“We are requesting an intervention by the Gulf Shield forces to stop this Iranian-backed Houthi expansion,” Yemeni Foreign Minister Riyadh Yassin said on Monday.

Yassin told to the six-nation Gulf Cooperation Council (GCC) and the UN that there should be a no-fly zone for rebels who control some airports in the country in the meantime.

The use of military aircrafts by Houthis was necessary, the foreign minister underlined, after warplanes struck near the presidential palace in Aden over the weekend.

“Time is not on our side,” Yassin said, without elaborating on whether Yemen wanted Gulf military intervention to entail. “Any fast intervention will be less costly and will lead to good and satisfactory results,” he added.

There was some support from Riyadh. “If this issue does not end peacefully, we will take necessary measure to protect the region from their aggression,” Saudi Foreign Minister Saud al-Faisal said in response to Yassin’s plea.

Yemeni Foreign Minister Yassin accused Iran of trying to build up its power in the region by backing Houthi fighters.

Yemen has been in political turmoil since a year-long popular insurrection forced former President Ali Abdullah Saleh to step down in early 2012, leading to a situation of instability used by different powerful armed groups to assert their power.

The country is now in the grips of a growing conflict between the Shiite Houthis and Sunni tribes, partly aided by the Sunni terror network al Qaeda, who are trying to stop the rebels’ advance toward the south.

The Houthis, from Yemen’s north, allied with former President Ali Abdullah Saleh, launched a takeover of the capital city, Sanaa, in September.

By January, President Abed-Rabbo Mansour Hadi was forced to resign and placed under house arrest. He subsequently escaped to the southern city of Aden, which he has declared a temporary capital.