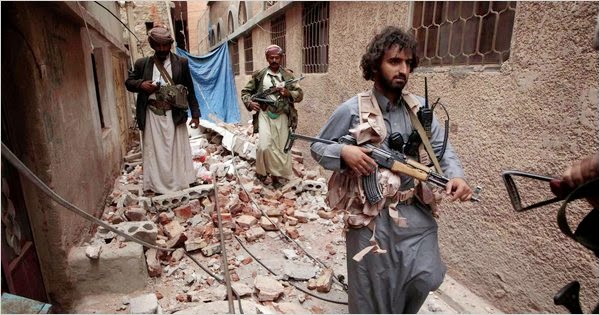 At least 30 people have been killed in clashes between pro- and anti-government forces in central Yemen, tribal sources said today.

Six tribesmen, including a tribal chief, were killed in these clashes.

The sources said that many Huthis had also been killed.

The advancing forces included units from the former presidential guard, an elite force that Saleh built during his three-decade rule, the sources added.

The gunfights took place as the Huthis, who seized control of Sanaa last year, sent additional reinforcements south, upping pressure on Hadi, who is refuged in the southern port city of Aden.

Hadi last month escaped house arrest in Sanaa imposed by the Shiite militia, fleeing to Aden where he retracted an earlier resignation tendered under pressure from the Huthis.

He has since tried to cement his position as Yemen’s legitimate president, but Hadi faces growing pressure from the Huthis and Yemeni army troops that have remained loyal to Saleh.

Although Saleh resigned in 2012 following nationwide protests, he has continued to enjoy widespread support from the armed forces, and is accused of aiding the Huthis in their advance south from their northern mountain stronghold.

Military sources in south Yemen said that reinforcements from the army’s Al-Hamza Brigade – under Saleh’s command – had been mobilised from central Ibb province to Qatabah, in Daleh, some 120 kilometres (75 miles) north of Aden.

Dozens of tanks belonging to the 133rd Brigade, also loyal to Saleh, were also sent to Qatabah, military sources and witnesses said.

The reinforcements came as anti-Hadi forces deployed south of the key city of Taez, which lies strategically on the road between Sanaa and Aden.

Demonstrations continued today in Taez against the arrival of pro-Saleh forces and militiamen in the city, after security sources said they seized the airport.

The head of Taez police denied late yesterday that the airport or other government installations had been taken over.