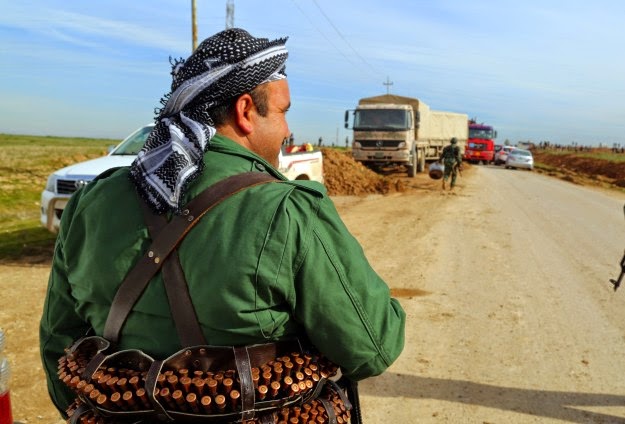 Iraqi Kurdish peshmerga forces claimed 123 ISIL corpses arrived at a hospital in Mosul on Friday.
The corpses included 11 foreign militants’ bodies from Pakistan, Chechnya and Saudi Arabia.
The militants were allegedly killed in clashes with peshmerga forces on Wednesday, according to Said Mimozini, a peshmerga commander.

Peshmerga forces have taken control over the road connecting Mosul, Tal Afar and Syria. This will force ISIL to take a 400 km (249 mile) road to reach Tal Afar city in northwestern Iraq, according Mimozini.

They also seized control of a village near Mosul Dam and killed 16 ISIL militants in the clashes. Peshmerga forces advanced to Hasan Jalal village, which is 12 km (7.5 miles) from Mosul, according to Major Rashid Hajji Ali from the peshmerga forces.

Iraqi troops and Iraqi Kurdish peshmerga forces are fighting against ISIL and are supported by a U.S.-led coalition that has been conducting airstrikes against the extremist group for five months.

– Five killed, 33 wounded across Iraq
The death toll included Ali al-Ansari, a cameraman who works for the private al-Ghadeer TV channel. The victim was killed and four other cameramen wounded in a mortar attack as he was covering the Iraqi security forces operation against ISIL in the Muqdadiyah area of the eastern province of Diyala, according to a media source.

Two people were killed and ten others wounded when an improvised explosive device exploded outside a cafe in the al-Obaidi area of eastern Baghdad, a police officer, who preferred not to divulge his name, told The Anadolu Agency.

One person was killed and five others injured in the Mahmoudiyah area of southern Baghdad, police said.
An improvised explosive device was planted in an employee’s car who works at the Hajj and Umrah organization. The employee was killed when the device exploded.

Ten civilians were wounded in mortar strikes launched by anonymous militants on the al-Shu’la and al-Ghazaliyah area in western Baghdad. The strikes damaged a number of houses.

At least four civilians were wounded in a random shooting while celebrating the victory of the Iraqi national football team over Iran in the AFC Asian football cup.

Iraq has been gripped by a security vacuum since June 2014 when ISIL stormed the northern province of Mosul and declared what it calls a caliphate in Iraq and Syria.