You are here: Home / West Asia / 48 Talibans killed in military operations in Afghanistan 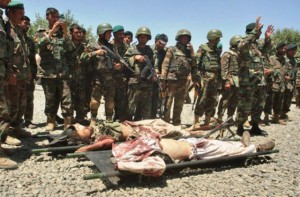 Fourty-eight militants have been killed in newest military operations across the country, the Afghan Ministry of Defense announced on Sunday.

A statement issued by the ministry states that these insurgents were killed in different parts of the country in past 24 hours, Afghan Khaama Press (KP) reported.

The statement adds that 20 militants were also wounded during these operations and 12 others detained by the security forces.

The press release issued by the Ministry of Defense further states that five soldiers from the Afghan National Army have been killed during these operations.

This comes as heavy clashes have been erupting between Taliban and security forces in different parts of the country including Badakhshan.

During these clashes Taliban recently seized a military base from security forces in Wardouj District of Badakhshan province.

But spokesmen of the ministries of defense and interior have repeatedly said that the militants are not in the position to hold an area longer.