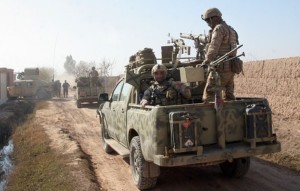 At least 47 anti-government armed militants have been killed in the latest wave of counter-terrorism operations across Afghanistan, the Ministry of Interior (MoI) said Sunday.

The counter-terrorism operations by the Afghan national security forces have been rampant during the recent week as the anti-government armed militant groups have stepped up terrorist attacks across the country including the capital Kabul.

“In past 24 hours, Afghan National Police conducted several anti-terrorism joint operations with Afghan National Army and NDS to clear some of the areas from terrorists and enemies of peace and stability of Afghanistan,” MoI said.

According to MoI, the operations were conducted in Nangarhar, Takhar, Faryab, Kandahar, Zabul, Maidan Wardak, Ghazni, Paktika, Paktiya, Herat and Helmand provinces, as a result 47 armed insurgents were killed, seven wounded and eight others were arrested by Afghan National Security Forces.