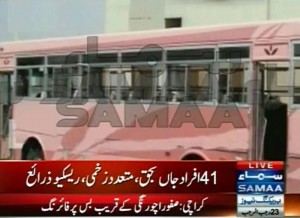 At least 47 people have been killed and dozens injured after gunmen opened fire on a bus in Pakistan’s southern hub of Karachi, according to Pakistan media.

Television channels carried pictures of a pink bus covered in bullet holes and an interview with Police Superintendent Najib Khan.

Police had earlier confirmed at least five were dead after gunmen forced the vehicle to stop before firing at it from outside.

“The gunmen stopped the bus and first fired at it from outside,” said the policeman. “Then they entered inside the bus and open fire indiscriminately. After that they checked to see if anyone was left uninjured.

“The bus had a capacity of 52 passengers but it was overloaded and dozens of people were boarding it. Most of them were from (the) Ismaili community,” he added.

An official of the Ismaili National Council, a group which represents the community, added: “We have confirmation of five dead and dozens injured including women and children in an attack on a bus owned by our community’s welfare board.

“The dead and injured have been shifted to the private Memon Medical Center nearby,” he said.

Pakistan, has seen a spike in sectarian violence in recent years, particularly against minority Shiites who represent around 20 percent of the country’s predominantly Muslim population of 200 million.

No one immediately claimed responsibility for the attack.