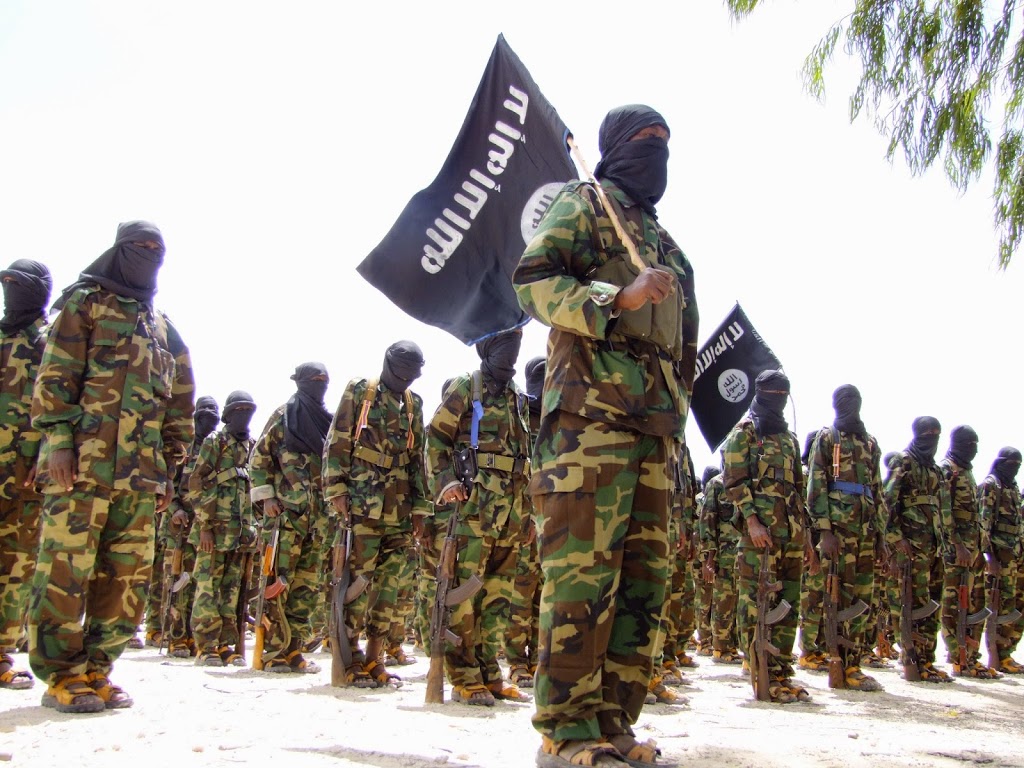 On Saturday the two most rapidly ascendant militant Islamist groups joined forces, in words at least, as Nigeria’s Boko Haram declared its allegiance to the Islamic State (IS) in Iraq and Syria.

The rise of these two groups has left Al-Qaeda aligned Shebab in the dust, damaging its capacity to attract foreign recruits, said Ken Menkhaus, a Somalia expert and professor at Davidson College, North Carolina.

“Shebab is really overshadowed by IS,” said Menkhaus.

Shebab aligned with al-Qaeda in 2012, but a turn to IS now seems possible. “Shebab has renewed its links with Al-Qaeda but hasn’t yet said anything negative about IS,” said Matt Bryden, director of Sahan Research in Nairobi. “There’s certainly interest in parts of Shebab to align with IS.”

Shebab websites and radio stations enthusiastically cover IS news and offer positive commentary, including of the weekend’s Boko Haram-IS union.

Shebab’s internal debate over whether to shift allegiance to the IS franchise intensified with the death of the group’s leader and Al-Qaeda stalwart, Ahmed Abdi Godane, in a US missile strike last year.

New emir Ahmed Umar is an al-Qaeda loyalist while other senior figures — among them Mahad Karate who runs the Amniyat, a special internal security wing that deals in intelligence and assassinations — advocate for a switch to the ascendant IS, experts say.

Shebab has fallen a long way from its height just a few years ago when it was the extremist group of choice for aspiring jihadists worldwide.

Mohammed Emwazi, recently revealed as IS executioner “Jihadi John”, is accused by British authorities of attempting to travel to Somalia via Tanzania in August 2009. Michael Adebolajo, the killer of an off-duty British soldier in London in May 2013, is similarly accused of attempting to join Shebab, via Kenya, in November 2010.

Scores of non-Somalis and diaspora Somalis once bolstered the ranks of Shebab, but now the group struggles to attract recruits from outside East Africa, even among its own nationals.

“Somalis in the diaspora are heading to Iraq and Syria, not Somalia,” said Bryden.

Last year it emerged that Sayid Hussein Feisal Ali, the Finland-born son of a presidential aspirant in Somaliland, had travelled to Syria to join IS.

The FBI believes there are many more.

Last month Hamza Naj Ahmed, from Minnesota, was charged with “conspiring to provide material support” to IS.

“Hamza Ahmed is at least the fourth person from the Twin Cities charged as a result of an ongoing investigation into individuals who have travelled or are attempting to travel to Syria in order to join a foreign terrorist organisation,” said US attorney Andrew Luger.

Local media in Minnesota reported that up to 15 young Somali-Americans had travelled to Syria by mid-last year, and that some had been killed fighting with IS.

Shebab’s allure for foreign jihadists had waned even before IS seized territory, and the world’s attention, last summer.

Its most notorious foreign recruit was Alabama-born US citizen Omar Hammami, known as Abu Al-Amriki, who appeared in recruitment videos praising the joys of jihad and rapping, badly.

But Hammami fell victim to an internal purge in 2013 that killed or alienated many of the group’s foreign fighters.

In two recent propaganda videos Shebab has sought to regain some ground lost on the media battlefield, recounting attacks in Kenya that targeted Nairobi’s Westgate shopping mall in 2013 and the coastal town of Mpeketoni in 2014.

But unlike the slick, punchy, international propaganda put out by IS in videoed executions or drone-shot warscapes, Shebab productions are flabby and parochial. The Westgate video ran to one hour and sixteen minutes and provided no new insight.

“I was unimpressed,” said Menkhaus. “They need a good jihadi editor.”

The film ended with a call for Muslims in the US, Britain and France to launch copy-cat attacks on shopping malls near them, which only underlined Shebab’s own inability to mount such assaults.

The Mpeketoni video revelled in slow-motion executions of civilians by masked gunmen. But by taking an attack on a small town in Kenya as its subject matter, the film only had appeal for a regional audience — reflecting Shebab’s current profile of mostly local recruits from Kenya and Somalia, the two countries where its energies are currently focused.

Shebab is “stronger regionally, but weaker globally,” said Menkhaus. However, he warned that while the militants are down, they are not yet out. “Shebab has had its day before and come back,” he said.