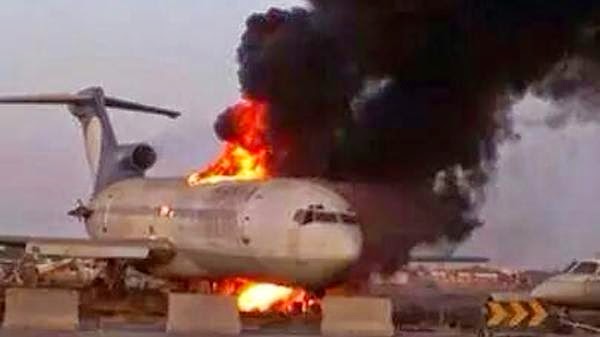 Extending a series of tit-for-tat strikes, the attack coincided with the swearing-in of Khalifa Haftar, one of the most divisive figures in post-revolutionary Libya, as army commander for the recognised government.

The recognized Prime Minister Abdullah al-Thinni and the elected parliament have been confined to a rump state in the east since an armed faction seized Tripoli in the west over the summer, reinstating the previous assembly and setting up a rival administration.

“Warplanes conducted air strikes this morning on Mitiga airport but there was no damage,” airport spokesman Abdulsalam Buamoud said. “Flights were suspended for only an hour … but now the airport is working normally.”

Mohamed al-Hejazi, spokesman for forces loyal to Thinni, said they had attacked the airport “because it’s outside state legitimacy … Weapons and foreign fighters bound for western Libya pass through the airport”.

Both sides are allied to rival factions which have been fighting over territory and oil facilities while Islamist militants have exploited the chaos.

To add firepower to small army forces loyal to Thinni, the eastern government and parliament have formed an alliance with Haftar, who began a self-declared war against Islamist militants in Benghazi, Libya’s second biggest city, last year.

Haftar gained support from some Libyans tired of their country’s disorder, but also drew criticism over air strikes and attacks on civilian airports and sea ports.

Haftar was sworn in on Monday in Tobruk, seat of the House of Representatives, said Tarek Saqer al-Joroushi, deputy head of parliament’s defence committee. Hejazi also confirmed this.

The Tripoli-based rival government has denounced Haftar as “war criminal” whose appointment as army commander will complicate mediation efforts by the United Nations.

The United Nations has been trying to persuade both sides to form a national government and said on Saturday that progress had been made at talks in Morocco.

Delegates will return this week for more negotiations after consultations at home, U.N. officials added. But both factions face internal divisions over the negotiations.