You are here: Home / Senza categoria / ISIS continues its desecration of the Middle East: Islamic State reduces Sufi shrines in Libya to rubble in latest act of mindless destruction 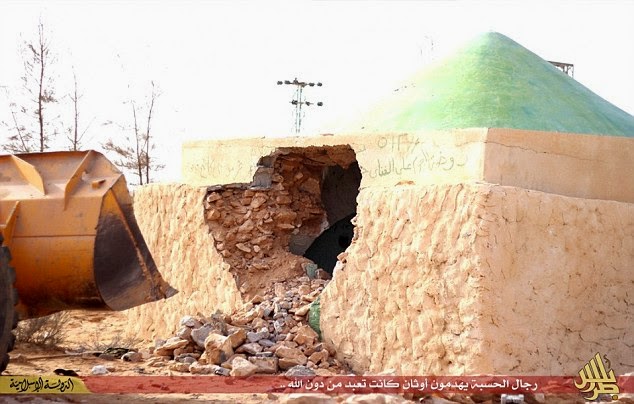 More pictures have emerged of Islamic State terrorists destroying sites of cultural significance, the latest showing Sufi shrines in Libya being levelled.
The Tripoli arm of the group posted pictures of a convoy of pick-up trucks, followed by an image of a man attacking a shrine with a sledgehammer.
Further pictures show the building being pushed over by a digger, the shrine having been reduced to a pile of rubble.
News of the destruction was tweeted by Conflict News, which posted the images with the message ‘#ISIS in Tripoli province posts photos of its “police” demolishing Sufi shrines’.
The fanatics have caused outrage by destroying several ancient relics and sites in Iraq recently, as well as books and rare manuscripts.
On Monday Iraq’s government began investigating reports that the ancient archaeological site of Khorsabad in northern Iraq had been attacked by the so-called Islamic State.
Adel Shirshab, the country’s tourism and antiquities minister, said there are concerns the militants had removed artefacts and blown up the site, located nine miles north-east of Mosul.
Saeed Mamuzini, a Kurdish official from Mosul, said militants had already begun demolishing the Khorsabad site on Sunday, citing multiple witnesses.
On Friday, the group razed 3,000-year-old Nimrud and on Saturday, they bulldozed 2,000-year old Hatra – both Unesco world heritage sites.
UN secretary general Ban Ki Moon has called the destruction a ‘war crime’.
A statement by his spokesman on Sunday night said Mr Ban was ‘outraged by the continuing destruction of cultural heritage in Iraq’ by ISIS.
Khorsabad was constructed as a new capital of Assyria by King Sargon II shortly after he came to power in 721BC and abandoned after his death in 705BC.
It features a city wall with a stone foundation and seven gates.
Since it was a single-era capital, few objects linked to Sargon II himself were found.
However, the site is renowned for shedding light on Assyrian art and architecture.
The sculptured stone slabs that once lined the palace walls are now displayed in museums in Baghdad, Paris, London and Chicago.
ISIS currently controls about a third of Iraq and Syria.
The Sunni extremist group has been campaigning to purge ancient relics they say promote idolatry that violates their fundamentalist interpretation of Islamic law.
On Sunday, officials reported that the jihadists had begun destroying the archaeological site of Hatra in northern Iraq.
It comes after fanatics went on a rampage in the Assyrian city of Nimrud in northern Iraq, destroying the 3,000 year-old winged statues placed at the gates of the Palace of Ashurnasirpal.
A video released last week also showed them smashing artefacts in the Mosul museum.
In January, the group also burned hundreds of books from the Mosul library and Mosul University, including many rare manuscripts.
At a press conference earlier yesterday, Mr Shirshab said they have called for an extraordinary session of the UN Security Council to address the crisis in Iraq.
‘The world should bear the responsibility and put an end to the atrocities of the militants, otherwise I think the terrorist groups will continue with their violent acts,’ he said.