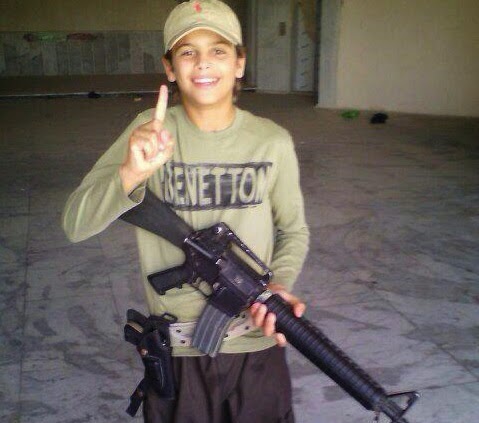 A 13-year-old boy is said to have become the youngest French jihadist to die fighting for the Islamic State (Isis) in Syria.

Abu Bakr al-Faransi was killed while on patrol at an IS border post near the western city of Homs a couple of months ago, as it was attacked by the Syrian army, local sources told France’s RFI radio.

The teenager from Strasburg, eastern France, was taken to the civil war-torn country and enrolled as an Islamist fighter by his family last year, according to RFI journalist David Thomson.

Thomson, a jihadism expert who authored a book titled Les Français jihadistes (The French Jihadists), quoted an IS militant as celebrating the boy’s death as “martyrdom”.

“He was a good child, determined. I loved him very much,” the source said. “This news makes me happy. I’m happy for him.”

Al-Faransi reportedly arrived with his entire family in Syria last August. Travelling with a camper van, his parents took him and six of his siblings to the IS de-facto capital of Raqqa, initially to recover the body of another brother Mohamed, who had died in fighting there, an investigation by Europe 1 revealed.

The family eventually remained in IS-controlled territory, joining the jihadi group. Several photos depicting some of the young brothers posing with Kalashnikov rifles were posted online.

One of them, said to be aged 10, also featured in a propaganda video where he was briefly interviewed along another child from Toulouse. Brandishing an automatic rifle, he urged other French children to join the conflict “We are in Raqqa here, there is war here […] come here and you’ll see how it goes,” the child said in the clip.

According to Thomson at least two of the brothers are among the roughly 90 Frenchmen who are believed to have been killed fighting for IS.

France is largest western contributor of militants to extremist militias in Iraq and Syria, with more than 1,200 of its nationals believed to be fighting there, according to the International Centre for the Study of Radicalisation (ICSR).

IS has been known to groom children to take part in jihad, also setting up dedicated military training camps, with the objective of creating an entire generation for whom violent Islamic extremism is normal practice.