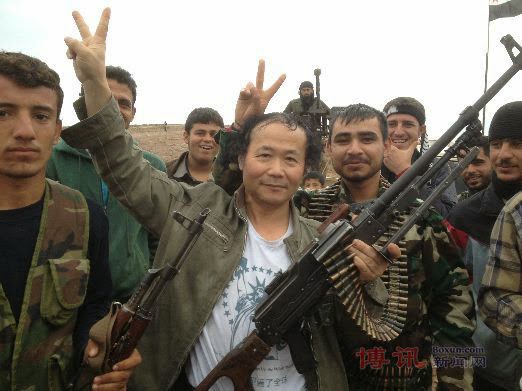 Chinese officials have claimed Muslims from the country’s western region are travelling to Syria and Iraq to join ISIS – before returning home to take part in plots against the communist rule.
Authorities in Xinjiang said they were planning to strengthen a crackdown on terrorism and extremism in the area, home to the minority Muslim Uighur, some of whom want their own independent state.
But officials failed to provide any further details to back up their claims – although The Global Times, a newspaper affiliated with the ruling Communist Party, said in December about 300 Chinese are fighting alongside the Islamic State.
‘There are Uighurs that have fled overseas and joined the Islamic State,’ said Zhang Chunxian, Communist Party secretary of Xinjiang, which borders Afghanistan and Pakistan, on Tuesday.
‘The organisation has a huge international influence and Xinjiang can’t keep aloof from it and we have already been affected.
‘We have also found that some who fought returned to Xinjiang to participate in terrorist plots.’
China has previously expressed concerns about the rise of ISIS, fearing it will fuel unrest and violence in Xinjiang, where some seek to set up an independent state called East Turkestan.
Xinjiang has seen repeated violence, as members of the Muslim Uighur have bristled under what they say is repressive Chinese government rule.
Beijing has previously blamed the violence on Islamic militants with foreign connections who are seeking an independent state in Xinjiang, but has offered little evidence and ignored calls for independent investigations.
Uighur groups say police have used indiscriminate deadly force against people protesting the government’s policies in the region.
Attacks blamed on Uighurs have also occurred in other parts of the country, including a car which plowed into Beijing’s Tiananmen Gate in 2013, killing five people.
Many of the group, who have traditionally followed a moderate form of Islam, have also begun adopting practices more commonly seen in Saudi Arabia or Afghanistan, such as full-face veils for women in the face of the crackdown.
Some Xinjiang cities have placed restrictions on Islamic dress, including the capital Urumqi, which banned the wearing of veils in public late last year.
Zhang said authorities would take measures to stop people from going abroad to fight with the group, and that he expects ‘fewer and fewer cases’ of that happening.
‘We are confident that we can fix it,’ he said.
Another official, Shohrat Zakir, said a yearlong crackdown on terrorist activities in the region ‘has won wide support from people of all ethnic groups.’