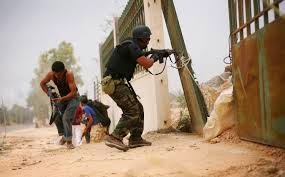 The army said today that some 200 fresh troops  had travelled from Beida to Benghazi to join in what appears to be increasingly intense fighting for the Leithi city district.

Combat is also reported to be continuing in Sabri, a district which last month the army was saying was effectively cleared of Ansar Al-Sharia fighters.

Yesterday a sailor and a soldier were killed in exchanges which also saw 11 government troops injured.  The bodies of the two men along with the wounded were taken to Jaala hospital.  The army has yet to comment on the casualties from today’s fighting.

The Beida formation that sent the two companies to Benghazi, was named by Alwasat as the Mujahid Hussin Al-Jaweifi battalion.