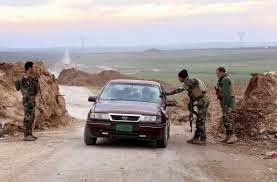 The seizure now denies the terror group, also known as ISIL, access to its primary route between Syria and Iraq.

During the two-week operation that ended March 7, anti-Daesh forces seized critical portions of Route 47 in Syria, a key communications and supply line of the terror group leading from Tal Afar, Syria into Mosul, Iraq, according to a statement from the Combined Joint Task Force that oversees the U.S.-led coalition efforts against the militants.

The forces also seized the Jazeera region in Iraq near the northern city of Mosul and liberated 94 villages in the region, while coalition forces conducted supporting air strikes that destroyed multiple Daesh weapons systems, vehicles and fighting positions.

The statement, however, did not specify which local groups took part in the given operations.

Syrian Kurdish militias are currently fighting the terror group in northeastern Syria, while in Iraq, Kurdish peshmerga forces, and the Iraqi army, accompanied by tribal and Shia militias, are fighting Daesh.

The Iraqi army is also conducting an offensive against Daesh in attempts to push the terror group north, and with the help tribal forces and Shia militia, Iraqis have seized control of large areas in Anbar province northeast of Baghdad.

Clashes between Iraqi forces and Daesh have been ongoing since last June when the militants seized Mosul and other territories in Iraq.