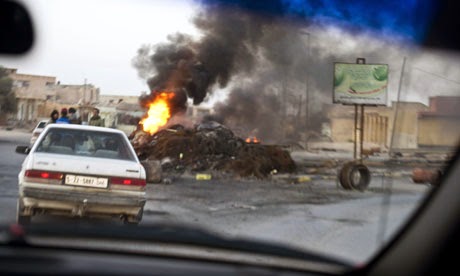 Zintan was hit three times today by a Libya Dawn jet fighter, according to an LNA Western Region military source. No one was injured in the first two raids, he said, but there had been damage to some buildings. He did not know the extent of the damage in the third raid.

There are reports on social media that a school, a private house and a store were damaged but these have not been confirmed. One report said that the eastern area of Zintan was targeted in one of the raids.

The military source claimed that the jet fighter used in the attacks had flown from Misrata and was one that had been repaired by Ukrainian technicians. These, he alleged, had been brought back to Libya by Abdurrahman Sewehli after his visit to Kiev early last month.

It has been impossible to verify the story about Ukrainian technicians again turning up in Libya, but it is widely believed among both Libya Dawn and LNA supporters.

The attacks are the latest in the tit-for-tat air strikes between Libya Dawn’s and the LNA’s limited and not particularly accurate air forces, and are seen as a reprisal for Monday’s strike on Mitiga airbase.

It was the first LNA attack following the three-day moratorium on air strike against Libya Dawn targets announced last Thursday by the head of the LNA air force, Saqr Adam Geroushi.

The military source told the Libya Herald that there would be a counter attack on Misrata and Mitiga airports “in the coming hours” in revenge for today’s attack on Zintan.