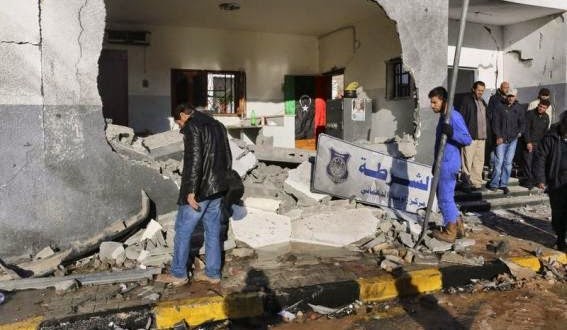 Islamic State militants claimed responsibility for a bomb attack on a police station in the Libyan capital on Thursday in a statement posted on Twitter along with photographs of the scene.

A bomb placed under a police car close to the Foreign Ministry in central Tripoli caused damage, local security spokesman Essam Naas said, and one officer was slightly wounded.

Militants loyal to Islamic State, the group that controls much of Syria and Iraq, have been exploiting the chaos in Libya where two governments allied to armed factions are vying for power four years after the overthrow of Muammar Gaddafi.

Groups of Islamist militants, who have declared loyalty to Islamic State over the last six months, have claimed responsibility for several high-profile attacks in what appears to be an intensifying campaign.

They claimed responsibility for an attack on the Corinthia luxury hotel in Tripoli in January, which killed five foreigners and at least four Libyans and killed a group in Egyptian Copts in the central city of Sirte, triggering air strikes by Egypt.

Egypt has called on the U.S.-led coalition fighting Islamic State in Iraq and Syria to broaden the scope of their operations to include Libya, highlighting how the insurgent group has expanded its reach around the Arab world.

Islamic State militants have claimed most of the attacks on foreign missions in the capital in recent months though officials there have blamed Gaddafi loyalists.

The capital is under the control of a self-declared government set up after an armed group called Libya Dawn seized the city in August, forcing the internationally recognised government to move to the east.

Most Western and Arab countries have evacuated staff from their Tripoli embassies since the attacks and after heavy fighting between rival factions in the capital.