You are here: Home / Senza categoria / Islamic State is training a new battalion of children aged between 13 and 15 as future suicide bombers 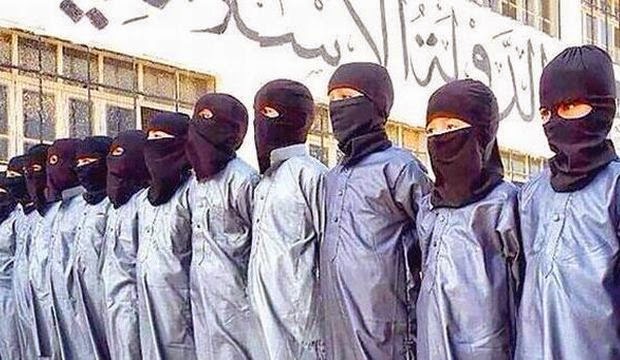 Videos of teenagers and young boys being trained in the use of weapons as well as guerrilla warfare have been circulated profusely on the Internet in the last few months. These images, often released by members of the media affiliated to the Islamic State of Iraq and Syria (ISIS), underline the exploitation of children in the conflict currently raging in Syria and Iraq.

ISIS’s recruitment effort has been two-pronged, focusing on adults as well as children. In May 2014 Syria Direct—a non-profit journalist organization—reported that children younger than 18 were spotted at checkpoints, while another teenager under the age of 17 was involved in the bombing of the Bab Al-Salam Syria–Turkey border crossing. According to a report by the Syrian Human Rights Committee, at least 800 children under the age of 18 have been recruited by ISIS.

The report added that ISIS relied on enticing programs which provided children with activities, entertainment and an atmosphere that they often miss out on in Syria due to the ongoing violence in the country.
“ISIS recruiters organize debates at schools about jihad and tell children that they are capable of fighting.

The group has adopted the same discourse around local mosques and in both cases they generally target children over 13 years old,” says Ahmad, an Iraqi activist originally from Mosul. Speaking to Asharq Al-Awsat under an assumed name, Ahmad explained that his nephew was forced to leave school by his parents, who feared he would be targeted by ISIS recruiters.

A video recently published by ISIS shows what appears to be a graduation ceremony for boys, who are later seen posing with weapons.

A local activist speaking to the International Business Times in November 2014, told the news website that over 30 “kids” had been “killed fighting with ISIS in the month-long battle against Kurdish forces in Kobani”.
According to the UK’s Independent newspaper, ISIS supporters also circulated images of a child in September who they labeled as the youngest foreign fighter to be killed in battles in territories under control of the terror organization.

The boy was believed to be no older than 10 years old. The Independent also published an interview in February 2014 with a 17-year-old who was arrested before he was able to execute a suicide attack in Iraq. The young boy, who apologized for his actions, said that many of the group’s suicide bombers were between 13 and 15 years of age.

Last November, AFP also quoted activists in the northern Syrian town of Kobani as saying that children were fighting alongside ISIS militants. The AFP article mentioned that the bodies of four boys who were involved in suicide attacks had been found; two of the boys were reported to be younger than 14 years of age. Children fighters have also been spotted in Syria’s Aleppo province, according to AFP.

Anthony MacDonald, chief of child protection at UNICEF explained to Asharq Al-Awsat that the organization’s global position towards any military group under international laws is that children under 18 should not be involved in conflict. “This includes recruitment and use of children, and by use we are not only referring directly to children fighting but also to the use of children in carrying water and doing other chores as well as to child brides and sexual exploitation of youth,” he said.

In addition to suicide bombers or fighters, children have also been used as executioners by ISIS. A UN report published last November highlighted the terror group’s systematic use of children under the age of 18 as executioners, citing the example of a 16-year-old fighter who had cut the throats of two captured Syrian soldiers in August 2014. A video also showed a child younger than eight putting to death two men accused of being Russian spies. The video could not be verified independently.

“The enrollment of children by terrorist groups is nothing new in Iraq,” says Ahmad, “It is a tradition that also prevailed under Abu Musab Al-Zarqawi,” the leader of ISIS’s parent organization, Al-Qaeda in Iraq.

According to the UN study, ISIS is using education as an indoctrination tool. The report underlined that since September 2013, the terror group had been using the Al-Bouhtri School in Al-Bab, Aleppo as a recruitment and military training facility for boys under the age of 18. It added that Al-Sharea’l youth camp near Raqqa reportedly trained over 350 boys between the ages of five and 16 for combat roles.

“The armed group also deliberately aims propaganda at children. In Raqqa city, children are gathered for screenings of videos depicting mass executions of government soldiers, desensitizing them to extreme violence,” the report said.

According to the same UN study, 153 Kurdish boys, aged between 14 and 16 years, who had been kidnapped on May 29, 2014 and detained in a school in Manbij in Aleppo, were subjected to daily instruction on militant ideology for a five-month period. Those who openly rejected the ISIS ideology and lessons were severely beaten as punishment.

In an interview with Asharq Al-Awsat, Raqqa activist Abu Ibrahim, who is behind the website ‘Raqqa is Being Slaughtered Silently,’ explains that children are recruited by ISIS using three types of approaches. “Sometimes they are indoctrinated, at other times parents give them up out of desperation and poverty for a modest sum. Finally, there have been cases of kidnapping,” he said.

While it is difficult to determine just how prevalent the exploitation of children is in areas under ISIS control, this practice is certainly widespread and will, no doubt, have long-lasting and disastrous effects on future generations of young Iraqis and Syrians.