You are here: Home / Senza categoria / 16 Killed during Clashes in Libya’s Benghazi 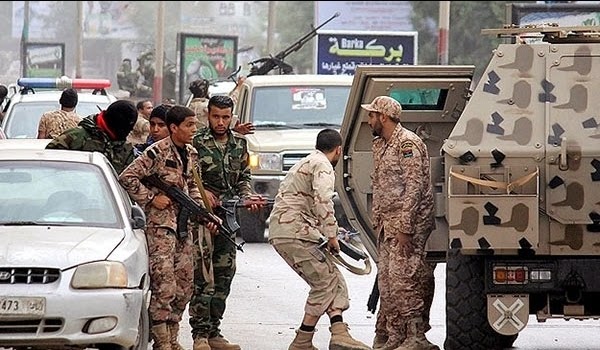 Sixteen people were killed and 45 others injured during clashes between forces loyal to Libya’s Army Commander Khalifa Haftar and Takfiri militants in the Eastern city of Benghazi.

“Sixteen bodies and 45 injured people arrived in Benghazi hospitals on Sunday as a result of clashes taking place in the Laithi district of the city,” a health ministry official said, World Bulletin reported.
“The fatalities involved nine army personnel and seven civilians, the latter of whom were killed due to random shells hitting their homes,” the official said.
Regarding casualties within the ranks of Takfiri militants, the official said that “they don’t bring their casualties to hospitals in the city, nor do they reveal their casualty figures.”
Libya plunged into chaos following the 2011 uprising against the dictatorship of Muammar Gaddafi. The ouster of Gaddafi gave rise to a patchwork of heavily-armed militias and deep political divisions.
The country has been witnessing numerous clashes between government forces and rival Takfiri groups that refuse to lay down arms.
Battles among the rival militants, who had participated in the anti-Gaddafi uprising, are mainly over the control of oil facilities in Eastern Libya.
Source: Fars