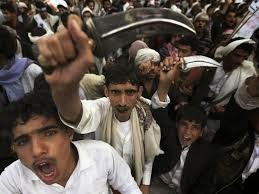 Opponents of Yemen’s Al Houthi militia announced the formation of a national alliance on Saturday to restore the authority of the state, in a major shake-up of Yemen’s political landscape.

Al Houthis invaded Yemen’s capital, Sana’a, in September and dissolved parliament last month. That created a political vacuum that is threatening to push the towards a civil war.
The coalition, called the National Salvation Alliance, formally unites players from across Yemen’s regional and ideological divides. It may strengthen their hand in ongoing United Nations-backed talks for a unity government.
“Its goal is to protect the state from collapse and disintegration while seeking to build a federal, democratic Yemen which rejects militias no matter whose side they may be on,” Manea Al Matari, a former protest organiser and a member of the bloc said.

The seven parties include activists, Islamists and members of Yemen’s former ruling party, who back President Abd Rabbo Mansour Hadi from his base in the country’s South.

It replaces the Joint Meetings Party, an opposition umbrella group founded in 2005. It joined many of the same groups that opposed Hadi’s predecessor, veteran autocrat Ali Abdullah Saleh, until he was swept from power by Arab Spring protests in 2011.
There was no immediate comment from Al Houthis or from UN mediator Jamal Bin Omar during an interview with pan-Arab channel Al Jazeera aired on Saturday.
“The ball is in the court of the political factions and parties. They have to be more serious this time, because the situation is very dangerous,” Bin Omar said.