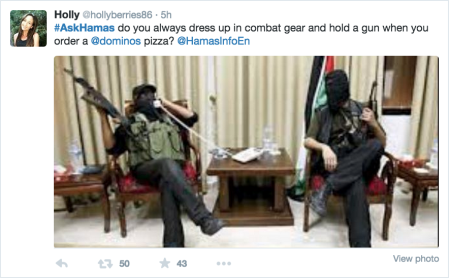 Hamas launched a campaign on Twitter on Friday aimed at improving its image, but was immediately hit by a barrage of sarcastic and mocking messages.

The movement, which controls the Gaza Strip and fought a 50-day war with Israel last summer, said its English-language initiative #AskHamas was designed so officials could answer questions from social media users.

The campaign was timed to coincide with the deadline for a European Union appeal against removing the group from the EU’s terror list, Hamas said.

A European court in December ordered the removal of Hamas from the bloc’s terror list, but the European Union said it would appeal the decision within three months.

“It is aimed to send a message to the European public… which demonstrated its solidarity with the Palestinian cause… that Hamas is not a terrorist movement, but a nationalist liberation movement.”

That was a reference to demonstrations in European capitals against Israel’s July-August campaign in Gaza.
The war killed nearly 2,200 Palestinians, mostly civilians, and 73 on the Israeli side, mostly soldiers.

Mr Al Nunu posted a link to Twitter account @HamasInfoEn, which showed pictures of the officials who would be answering questions, including the movement’s most senior leader in Gaza, Ismail Haniya.

“Truth from the mouth of the horse”, it tweeted.

But before the campaign even went live, Twitter users were already posting mocking messages under the #AskHamas hashtag.

“If a tree falls in the woods, and there’s no one to hear it fall, is it still Israel’s fault,” one user asked.

“Would you rather fight one horse-sized duck, or 100 duck-sized horses?” another jibed.

Hamas had apparently expected online detractors to try to sabotage the campaign, tweeting that “Zionist propagandists will try to convince you that this is a rocket, not a tweet. Do not fall for that.”

On Friday evening, the movement had not yet posted any answers to users’ queries.

A spoof account named @AskHamas had begun to retort with sarcastic answers, but @HamasInfoEn stressed it was the only official account for the campaign.