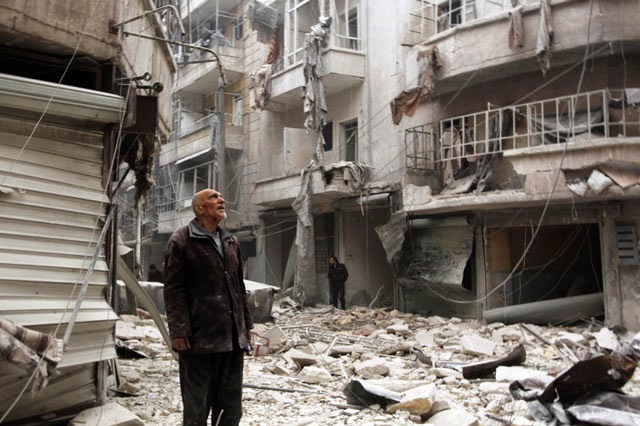 “We refuse to meet with Mr Staffan de Mistura if it is not on the basis of a comprehensive solution to Syria’s drama through the exit of (President) Bashar Al Assad and his chief of staff, and the prosecution of war criminals,” Aleppo’s revolutionary council said in a statement.
On Saturday, de Mistura held talks in the Syrian capital to try to finalise a deal to freeze fighting in the war-ravaged second city of Aleppo.
De Mistura’s visit started as the army and pro-regime fighters regained territory in southern Syria from forces opposed to President Bashar Al Assad.
Once Syria’s commercial hub, Aleppo has been devastated by fighting that began in mid-2012, and the city is now split between loyalist forces and rebels.
De Mistura said last week that the government had shown a willingness to suspend aerial bombardment of Aleppo for six weeks to allow a humanitarian ceasefire.
Under the plan, rebels would be asked to suspend rocket and mortar fire there during the freeze.
De Mistura incurred the wrath of the opposition earlier in February by describing Al Assad as “part of the solution” to Syria’s conflict.
About 220,000 people have been killed in Syria since the conflict began in March 2011 with anti-government protests that spiralled into a multi-sided civil war drawing foreign jihadists.
In Dara’a province southwest of Damascus, regime troops backed by Lebanese Shiite militant group Hezbollah, Iranian advisers and Iraqi militiamen gained territory from opposition rebels, the Syrian Observatory for Human Rights said Saturday.
The pro-regime forces took control of three villages and several hills in Dara’a in clashes that left seven rebels dead, the Britain-based monitor said.
Hezbollah and regime forces launched an operation earlier this month to try to reverse sweeping gains in the south made by anti-Al Assad rebels.UN envoy Staffan de Mistura paid a surprise visit Sunday to a church near war-wracked Syria’s capital in a show of solidarity with the country’s Christian minority targeted by militants.

The church has been used as a place of refuge for Assyrian Christians fleeing the chaos of Iraq after the 2003 US-led invasion of that country.

His visit coincided with a mass of solidarity with the scores of Syrian Assyrians kidnapped by Daesh militants in Hassakeh province of northeast Syria.

Last week, Daesh kidnapped 220 Assyrians in the Tal Tamr area where the extremist Islamist group has seized control of 10 Christian villages, according to the Syrian Observatory for Human Rights.

Almost 5,000 people have since fled to Kurdish- and government-controlled areas.