You are here: Home / West Asia / 46 militants, 8 soldiers killed in Afghanistan within day 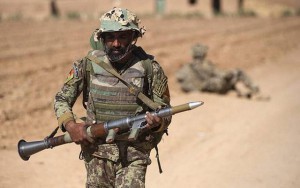 About 46 militants have been killed in operations and clashes with Afghan army forces in different provinces within the last 24 hours, the country’s Defense Ministry said on Wednesday.

“A total of 46 terrorists were killed, 36 others wounded and two terrorists were captured during military operations over the past 24 hours,” the ministry said in a statement.

The statement also confirmed losing eight army soldiers as a result of landmine blasts and clashes with the militants within the same period.

In addition, an airstrike carried out by NATO-led forces destroyed a militants’ ammunition and explosive material cache in Paktika’s Nika district last night, according to the statement.