You are here: Home / West Asia / 46 ISIS and Taliban militants killed in Afghanistan within day 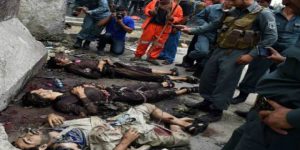 At least 46 militants were killed amid operations launched by Afghan security forces since early Thursday, the Defense Ministry said on Friday, like reported by xinhuanet.com.

“Afghan army, police and intelligence agency personnel carried out several military and cleanup operations over the past 24 hours, killing 46 terrorists and wounding 15 others,” the ministry said in a statement.

Among the killed militants were 17 members of Islamic State (IS) group, including a senior commander of IS named Mawlawi Nahim, the statement added.

The Afghan security forces had beefed up security operations across the country recently.

The Taliban and IS militants, who have been on rampage since the beginning of 2015 when the Afghan security forces assumed the full responsibilities of security from the U.S. and NATO forces, have yet to make comments.