You are here: Home / Senza categoria / Libya: today will be a huge assault against Islamic State in Sirte 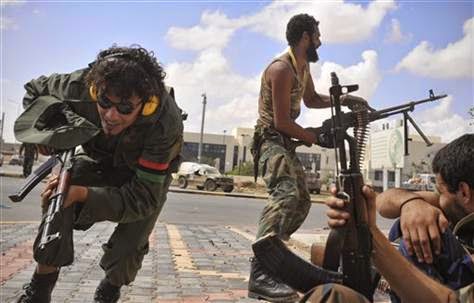 Fighting continued Sunday around Sirte as Islamic State militants remained in control of the coastal city’s downtown, and militia from Misrata and the Libya Dawn military alliance prepared for what they said would be a huge assault Monday.

Along the western highway in the late afternoon, a Libyan Dawn warplane circled, dropping two bombs on what was believed to be a prison occupied by Islamic State. In the morning, mortar and gunfire had battered the area.

Roads were deserted, with little sign of residents fleeing the area. One family in a car trying to enter the city Sunday evening expressed their anger at Misratan troops trying to keep them from what is a volatile area. “Our home is in a safe place in the city,” they said.

Six Misratan fighers have been killed in the fighting so far, with dozens more wounded. The bodies of 17 Islamic State militants killed Saturday were flown to Misrata on Sunday, where they were brought to a hospital morgue.

Misrata forces estimate that up to 25 Islamic State fighters have died since fighting broke out Saturday.
The fighting came one month after Islamic State posted a video showing the beheading of 21 Egyptian Christians on a Libyan beach and appears to have ended insistence by the government in Tripoli – one of two that claim to rule this country – that Islamic State forces were really sympathizers of the late Libyan leader Moammar Gadhafi.

One high-ranking Misratan government official said late Sunday that Sirte’s tribal leaders have distanced themselves from Islamic State in talks with Misratans. He also said Misratan forces had killed the local Islamic State leader and an unspecified number of foreign fighters.

But Islamic State fighters still occupy the landmark Ougadougou complex, a prison and a hotel. They also control Sirte’s university, the Ibn Sina hospital and the fishing port. Misratan forces have encircled the city, thrown up four checkpoints near the power station to the west, and control the key military airport and seaport, as well as residential areas.

Misratan forces also brought in reinforcements from Misrata, 150 miles to the west, and from Sidra, Libya’s largest oil port, where Libya Dawn fighters have been battling forces aligned with Libya’s other government, which is based in Tobruk. Misratan forces appeared to be holding positions about 10 miles from Sirte on the west and south and perhaps a mile on the east.

In the early evening, Misratan troops relaxed around a campfire in a outlying field. One said the Misratans now are focused on expelling not only Islamic State but also Ansar al Shariah, the militia that the United States blames for the death of U.S. Ambassador Christopher Stevens in Benghazi.

“We need to get out Ansar al Sharia and Daesh,” said Ali Alheishi, 31, whose brother was killed during the 2011 anti-Gadhafi revolution, using an Arabic acronym for the Islamic State. “I only believe in the Libyan flag, not the black flag.”