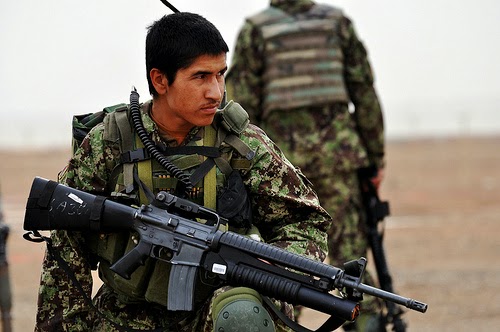 Afghan security forces have killed 10 fighters who claimed to be from Islamic State (IS) in Afghanistan, officials said, amid reports that growing numbers of disgruntled Taliban fighters have joined the militant group that controls much of Syria and Iraq.

Defense ministry spokesman Dawlat Waziri said the militants were all associated with the Islamic State, known in Afghanistan as “Daesh”. They were killed in an operation in the southern province of Helmand on Sunday.

The government identified one of the militants as Hafiz Wahidi, the nephew and successor of Mullah Abdul Rauf, a veteran militant killed last month in a drone strike.

Officials say Rauf, a former Guantanamo Bay detainee, had also defected from the Taliban and called himself the leader of the Islamic State in Helmand.

Reports of Taliban fighters switching sides to IS in recent months have raised concerns in war-weary Afghanistan, though there is little evidence of any operational ties between the fighters and the group’s leadership.

People fear the emergence of the IS group could heighten sectarian tensions in Afghanistan.

The Afghan army has been leading operations in Helmand since February to clear the restive southern province of Taliban fighters ahead of the so-called fighting season that kicks off each spring.

Fifty-eight armed Taliban members were killed by Afghan security forces across the country on Sunday, a Ministry of Interior statement said.