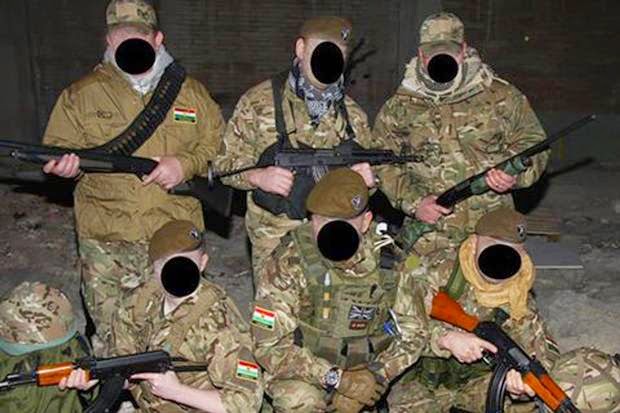 An eight-strong team of former British Army soldiers is preparing to leave Britain to join the fight against Islamic State in Syria, the Standard can reveal.

The team are training to fight as a single volunteer unit alongside the Kurdish militias on the front line in northern Syria.

Images on social media show members of the group posing in combat fatigues and clutching high powered assault rifles on a training exercise in Europe.

The caption to one image of a soldier with a machine gun reads: “Bad news delivery system, if you’re ISIS!”
The former soldiers are believed to include a number who have Special Forces training.

They are among a growing band of foreign fighters, including Americans, British, Australian and French volunteers, who are lining up to fight against the jihadist terror group.

One report suggests that around 100 Westerners are now fighting against Islamic State.

Britons include Macer Gifford, 28, who left a job in the City, and former bouncer Tim Locks, who worked at a Staines night club, and sold his home to join a militia unit in Kurdistan. Both are still believed to be abroad.

Earlier this month a former Royal Marine became the first Briton to be killed in action against the jihadists. Konstandinos Erik Scurfield, 25, from Barnsley, travelled to Syria within days of leaving the military last November.

The former soldiers who spoke to the Standard said they had bought their own uniforms and created their own sword symbol to represent their group entitled IVFOR (International Volunteer Force).

One veteran told the paper: “I and several colleagues all ex-armed forces have formed a small unit which is open for any English speaking individuals from any nation. We will be in Syria within weeks and are training everyday. We intend to submit our skills to the people of Kurdistan.

“Although we wear a similar uniform to UK armed forces, we have no association to them other then the fact that we are ex-armed forces. Our cap badge is lightning crossed by a sword, Cita et Certa – Swift and Sure.

We will deploy a strong force to aid the Kurdish militias. We intend to work as one effective, rather than split or tag onto other militia units.

“We intend to be a serious asset.”

The image of the ex-squaddies was taken at a location in Europe where they are said to have been training.

A colleague said the guns were genuine and “legal weapons.”

The colleague said: “This is something that has been organised and planned for some time. These people are all very upstanding people, they are not thugs.

“They intend to work as an independent group.”

The colleague refused to give details of the army backgrounds of the group saying only: “These people are extremely experienced and extremely effective.”

Another former soldier, father of three Daniel Hill, 39, said he is also planning to travel to join the Peshmerga militia.

He told the Standard: “I have to do my part to help. After watching the news and seeing the evil things these terrorist are doing to people is too much.

“Since leaving the army, I’ve always wanted to go back to joining a military and now’s my opportunity.”