You are here: Home / Senza categoria / Kurds propose a solution to Syrian crisis 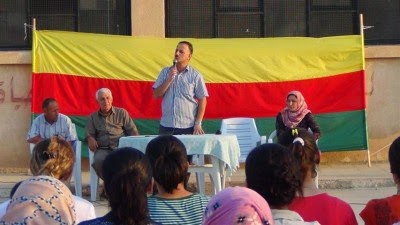 The Movement for a Democratic Society (TEVDEM) has proposed a project called “A Democratic Solution of Syria Project”, to solve the crisis that Syria has faced over the last four years.
The project starts by describing the situation in Syria, the division of the population politically, socially, culturally and economically as well as mentioning the relationships among Syrian factions. Later, it analyses incidents in the country over the last four years that have resulted in current situation.
TEVDEM is a union of Kurdish political parties in Syrian Kurdistan that consists of the Democratic Union Party (PYD), People’s Protection Units (YPG), Women’s Protection Units (YPJ) and Free Journalists Group among many other small interested parties.
The project proposes the creation of a democratic community called the Syrian Republic or Democratic Republic of Syria, build on some initial ideas.
The ideas are:
Standing against Salafi jihadist organizations,
Protecting the unity of Syria and
Respecting the diverse community of Syria with all its factions.
TEVDEM has proposed steps for the implementation of the project. Firstly, discussions among all political parties in Syria that believe in peaceful, democratic solutions regardless of differences, before preparing a final draft.
Secondly, the formation of a front including all parties, holding wide ranging meetings of their representatives, approving the draft and implementing it in reality.
Thirdly, convening a Syrian national congress (Syrian peace and democratic solution congress) and inviting all the parties, civil society organisations and social activists that believe in a peaceful solution to the congress, supervised by the United Nations (UN).
Fourth, electing a council that authority and duties determined by all factions, where representatives of women and youths must be considered. The duties of the council will be working on bringing about a ceasefire, freeing political prisoners, contacting those countries that are related to the Syrian crisis and UN, administrating this stage until it can call a general election.
Fifth, the authority and duties of the council will be over once this transitional stage has ended.
The project does not mention the current Syrian regime or its president. Also, the project does not mention whether the project will be with or without the participation of the regime.
TEVDEM’s proposal was released following the news given by Syrian Information Minister Omran al-Zu’bi last Thursday that the regime is discussing officially recognising the democratic administration of Syrian Kurdistan within the framework of the Syrian constitution.