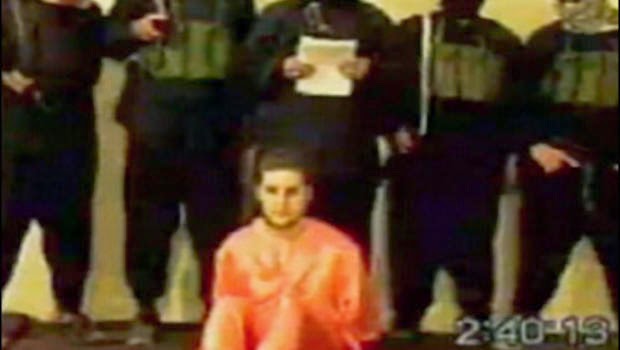 The Islamic State terrorist group posted pictures Tuesday of the beheadings of four men it said were recruiters for pro-government militia fighting its terrorists in northern Iraq.

The images show four men dressed in black kneeling in an empty street with knife-wielding jihadis standing behind them, after which they are pictured being beheaded.

Text accompanying the photographs said the beheadings were carried out in Salaheddin province, where Iraqi troops backed by militia are fighting to retake the provincial capital Tikrit from ISIS.

The exact location where the photos were taken was unclear, and their authenticity could not be independently confirmed.

A massive anti-ISIS offensive to take Tikrit by Iraqi army troops, Iranian-backed Shia Islamist militias and some Sunni tribesmen has ground to a near halt, despite making significant initial gains.

Ten of thousands of fighters had their advance slowed against just a few hundred ISIS jihadis by sniper fire, mines and booby traps, and on Monday a senior commander of the Shia Imam Ali Brigades militia was killed in clashes.

It has carried out numerous atrocities in areas it controls ranging from public beheadings to enslavement and rape.