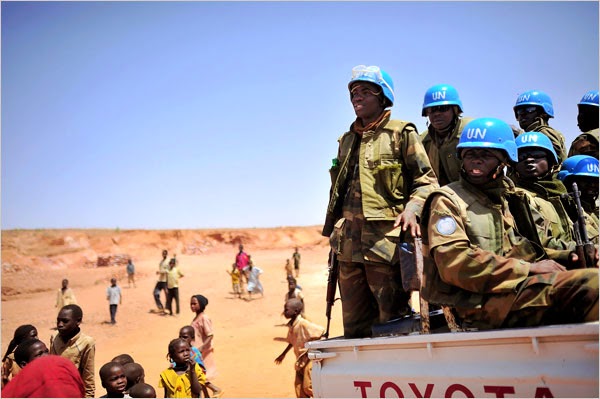 It was an awkward reminder of the world’s failure to hold to account a president accused of war crimes: A group photo from Egypt’s economic summit over the weekend shows US Secretary of State John Kerry standing just behind Sudan’s President Omar al-Bashir.

Even as the International Criminal Court scolds the UN Security Council to make sure a defiant al-Bashir faces trial on charges of orchestrating genocide in Sudan’s western Darfur region, the United Nations appears to be easing away from the conflict. Under pressure from al-Bashir, the UN opened talks this month with Sudan on a plan for a large peacekeeping mission to leave Darfur.

The Security Council on Tuesday will discuss the troubled mission and how its eventual departure will affect a civil war that once drew the world’s outrage.

The idea alarms observers of the chaos in Darfur, where nearly half a million people were displaced last year, the most in a decade. The UN has blamed the spike in violence largely on a new rapid action force backed by Sudan’s government, which has been fighting rebels across the vast region since 2003. More than 300 000 people have been killed overall.

‘Exit strategy’
Some suggest that al-Bashir, who is running for re-election this year, is just posturing and doesn’t really want to lose the benefits of a $1.3bn-a-year peacekeeping mission. But last year he ordered the expulsion of top UN officials and the closure of the mission’s human rights office in the capital, Khartoum, and called for an “exit strategy” for the joint UN-AU force, which numbers more than 20 000.

Adding to the tension was the mass rape of more than 220 women in a Darfur village last October by Sudanese army troops. The peacekeeping force, called UNAMID, has been blocked from entering the village after a brief and inconclusive visit shortly after reports of the mass rape emerged.

But Human Rights Watch pieced together details of the attack through more than 100 interviews with local residents, calling it “a new low in the catalogue of atrocities in Darfur.”

That a single Human Rights Watch researcher could produce a damning report through telephone calls alone, while one of the UN’s largest peacekeeping efforts appeared powerless to act, shows the deep disconnect between the mission and Sudan, said Ryan D’Souza, advocacy officer for the Global Centre for the Responsibility to Protect.

‘Worst kept secret’
“It’s the worst kept secret: The mission is failing,” D’Souza said. At the same time, “a withdrawal would send al-Bashir the message that he’d won.”

UNAMID has long been criticised for its ineffectiveness in Darfur. It also has become the third-deadliest peacekeeping mission in UN history. At least 215 members have been killed since it was created in 2007.

A new report by the UN secretary-general says the mission’s downsizing has begun, though it notes there has been “no tangible progress towards a comprehensive resolution of the conflict.” A total of 770 posts will be gone by April.

And UNAMID now has measures to repatriate underperforming members, “in light of several incidents in which military units failed to respond effectively to armed attacks.” The report gives no details.
A fuller exit strategy, based on the new talks among Sudan, the UN and the AU, is expected by the end of this month.

Charges of genocide
One Sudanese activist with projects in Darfur, who spoke on condition of anonymity out of safety concerns, said al-Bashir associates the peacekeeping mission with the Security Council’s referral of the Darfur situation to the ICC in 2005. That led to al-Bashir being charged with genocide.

Since then, Sudan’s president has travelled to several countries without being arrested. And the Security Council now faces its sharpest divide since the Cold War. Permanent member Russia can block action on Sudan with a veto, backed by China. Both countries have business interests there.

The activist is upset with al-Bashir’s actions, but also impatient with UNAMID: “The mandate of the mission is just observing. What is the use of observing violations if they don’t interfere?”

If that doesn’t change, the activist said, “I think they should leave.”