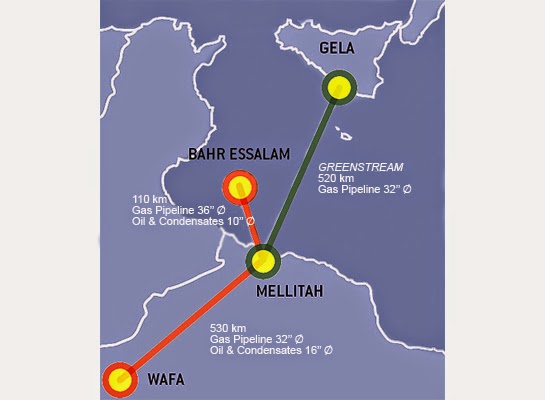 ENI -via ENI North Africa BV- is the operator in Area D with a 100 percent share of the area during the exploration phase. The discovery was made through well B1-16/4, drilled at a water depth of 150 metres in the Metlaoui Formation of Eocenic Age.

It has the potential to develop quickly due to the proximity of the Bahr Essalam production infrastructures. ENI is using three drilling plants in offshore exploration and in outlining the area D discoveries.

The development of Libyan natural gas will support the growth of domestic consumption and local industry, helping the country to keep its role as a strategic supplier to Italy and Europe. The D area includes the Wafa and Bahr Essalem fields which, since 2004, have supplied the domestic and the Italian markets via the Greenstream pipeline.

The area D fields produce a high percentage of liquid product. The offshore area where the discovery occurred is a zone where ENI is carrying out major development projects which will enhance recent discoveries.

ENI is also exploring to meet local demand. ENI’s gas supplies to Libya have grown from about 1 billion cubic metres in 2009 to 4.3 billion cubic metres last year, with a potential to reach 6.2 billion next year. ENI has been working in Libya since 1959, and produces about 350,000 barrels a day of oil equivalent.