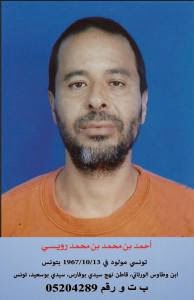 Clashes between Libyan militia and the Islamic State group in the coastal city of Sirte left dozens of militant fighters dead, including one of the terrorist group’s top military commanders, Tunisian media reported.
He was wanted in his native Tunisia for killing two politicians in 2013. His presence in Libya underscores the major role Tunisia plays in exporting fighters to the region, despite being a relatively stable country with a secular government.
Tunisian-born Ahmed al-Rouissi, who went by the nom de guerre Abu Zakariya al-Tunisi or Abu Uwais al-Tunisi, was reportedly killed in clashes last weekend between the group also known as ISIS and a brigade of fighters from Misrata aligned with Libya Dawn, a coalition of militias who set up a government in Tripoli last year.
Though Libya Dawn is often portrayed as an Islamist coalition, the Misratan militias make up a large portion of the group with roughly 40,000 fighters and are considered moderate to secular.
Before joining ISIS, Al-Tunisi was a known leader of Ansar al-Sharia Tunisia, a U.S.-designated terrorist group that used to have ties to al Qaeda. He was wanted by the Tunisian Ministry of Interior for assassinating Chokri Belaid, a Tunisian lawyer and left-leaning politician, and Mohamed Brahmi, the leader of an opposition party, according to the Associated Press. Al-Tunisi’s death was confirmed on the social media account of the Okba Ibn Nafaa brigade, a local group affiliated with ISIS, according to Tunisia-Live.
Tunisia has some of the highest numbers of foreign fighters joining ISIS, many of them first making a stopover at an ISIS training camp on the Libya-Tunisia border. Before the extremist group announced its presence in Libya and declared three wilayat (provinces) there, fighters would leave Libya and head for Turkey, where they could easily cross into Syria. But ISIS has begun recruiting specifically for its campaign in  Libya as well.
On Monday, the Tunisian government reportedly arrested nine would-be ISIS fighters attempting to cross the border into Libya. A Tunisian jihadi leader, Seifallah Ben Hassine, reportedly switched allegiance to ISIS last year and has been working to recruit Tunisians to fight with the movement since.