You are here: Home / Senza categoria / Iraq’s Tikrit offensive stalled by IS bombs – ‘We need forces trained in urban warfare to break in’ 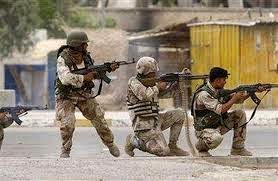 Iraq’s huge offensive to retake Tikrit from the Islamic State group was stalled yesterday by a slew of bombs and the several hundred jihadists holding out in the city. While Iraqi troops and militia were able to surround the jihadists in Tikrit with relative ease, ousting them from the city’s streets has proved far harder.

“The battle to retake Tikrit will be difficult because of the preparations (IS) made,” said Jawwad al-Etlebawi, spokesman for the Asaib Ahl al-Haq, a Shiite militia that is playing a major role in the operation alongside the regular army. “They planted bombs on all the streets, buildings, bridges, everything.

For this reason, our forces were stopped by these defensive preparations,” Etlebawi told AFP. “We need forces trained in urban warfare to break in,” he said, adding that the jihadists are surrounded, “but any besieged person fights fiercely.” The operation to recapture Tikrit, the capital of Salaheddin province, began on March 2. Iraqi forces have tried and failed three times before to retake the city, which was the hometown of executed dictator Saddam Hussein.
Interior Minister Mohammed Ghabban said on Monday that the latest operation had been halted to avoid casualties and protect infrastructure. But it is unclear how stopping operations against the jihadists for anything other than an extended siege would change either of those situations, unless Iraqi forces receive additional external support such as air strikes.
Staff Lieutenant General Abdulwahab al-Saadi, the head of the military command responsible for Salaheddin, told AFP on Sunday that Iraqi forces in Tikrit needed air support from the US-led coalition. Saadi said that he asked the defence ministry to make the request to the coalition, but that no air support had yet been forthcoming.
IS beheadings
Iraq has formed paramilitary units dubbed the Popular Mobilisation force to fight alongside the regular army. It is made up largely of Shiite militiamen but the government has attempted to recruit Sunni Arab volunteers to it to join the battle in overwhelmingly Sunni Arab Tikrit. IS posted pictures on Tuesday of the beheadings of four men it said what were recruiters for the units in Salaheddin province.
The images show the men dressed in black kneeling in an empty street with knife-wielding militants standing behind them, after which they are pictured being beheaded. IS has carried out numerous atrocities in areas it controls, including public beheadings and mass executions as well as enslavement and rape, and caused millions to be displaced. IS spearheaded a sweeping offensive that overran large areas north and west of Baghdad last June.

It also holds significant territory in neighbouring Syria, where it has taken advantage of the uprising against President Bashar al-Assad, now in its fifth year, to oust government forces and rival rebel groups from a swathe of the east and north.