You are here: Home / Africa / Rumours of pro-Isis factions within al-Shabaab are not far-fetched 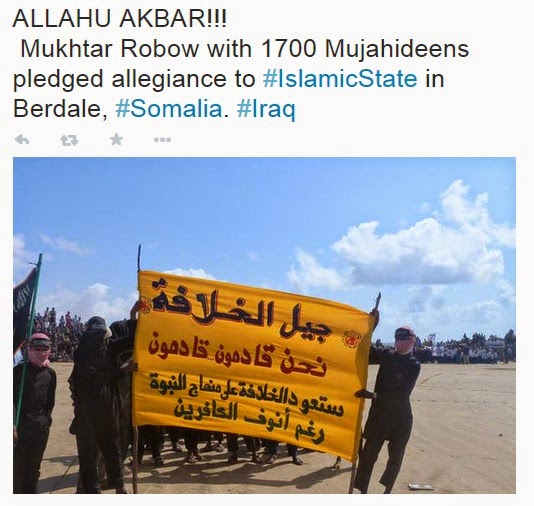 No official statement has been released by al-Shabaab, Core AQ, or IS regarding such dissent. However, mounting rumors and unconfirmed reports of Shabaab fighters suggest that those floodgates may have already opened.

Social media posts from some al-Shabaab fighters have indeed expressed desire to leave the group for IS. “Mujahid Miski,” the online alias of an alleged American al-Shabaab fighter named Mohamed Abdullahi Hassan, has openly stated his support for the group while claiming the influence of recruits to Somalia is fading.

Hassan has also stated that his fellow al-Shabaab fighters are aware of his support for IS, allowing him to state that if he had the chance, he would “go to Sham [Syria] without a little hesitation.” He has also stated:

“The Muslims of this land need perfection too. We need the Islamic State to expand insha Allah [God willing].”

On 6 March, Mogadishu News, the Twitter account of a freelance reporter based in Mogadishu, provided a series of tweets forwarding claims that pro-IS and pro-AQ al-Shabaab forces had begun “battling” in the Somali town of Jilib. The account also stated that IS “now has more supporters” in Shabaab and that top leaders of the group would be meeting to discuss their status under AQ.

Such reports have been contested by other sources. Live from Mogadishu, the account of another freelance journalist in the capital city, posted that these claims were “completely unfounded.” Still, posts and discussions about IS in Somalia have more prominent in recent days.

Jihadist accounts on Twitter also began commenting on rumors of a split within the Shabaab. A March 12, 2015 tweet by user Abu Musab al Amreeki showed what appeared to be jihadi fighters holding a banner. The tweet was accompanied by a message mentioning Shabaab spokesman Mukhtar Robow:

Jeel al-Khilafa [Generation of the Caliphate]
We are coming…. We are coming,
The caliphate will be back on the Prophetic way despite noses of the disbelievers

Twitter users in unconnected conversations also commented on the rumours. On 13 March, user Colonel ShaamiBro tweeted: “Nobody is talking about the huge spilt that just happened in AlShabaab???”

User Abu Malik, replied, “woah what? There was a split?” To this question, Colonel ShaamiBro responded, “yes it was between pro AQ n IS supporters in AlShabaab.”

Colonel ShaamiBro also stated at one point, “Brother just confirm its not true,” though it was not clear if he was forwarding a claim or asking for such a statement.

Likelihood of Shabaab Defection
Despite al-Shabaab being a part of AQ, it is the only jihadist group that is supported equally by both AQ and IS followers. Al-Shabaab releases online are regularly shared and celebrated on both sides of the jihadi movement, and its releases are often pushed out through both pro-IS and pro-AQ forms—a luxury no other jihadist group is given.

It is also notable that even while al-Qaeda in the Arabian Peninsula (AQAP), a group once admired by IS fighters, went forward to condemn IS’s “Caliphate,” al-Shabaab has remained relatively neutral on the issue.
At the end of the day, however, al-Shabaab remains firmly and officially under AQ, and reinstated its pledge to AQ leader Ayman al-Zawahiri last September. Furthermore, not every leader within Shabaab views IS positively.

In October, allegations surfaced that former al-Shabaab leader Mukhtar Abu al-Zubeir had rejected a monetary offer from pro-IS Somalis for the group’s allegiance. The claims, made by a prominent jihadist on Twitter, stated al-Shabaab officials held a meeting on the matter:

The Movement came out with a Shariah position, that the group of the State [IS] is a group of extremism and deviation, and that their announcement of a Caliphate is heresy that has no relation to Shariah. Every member who entered with the bearers of dollars who represented the pledges of allegiance (may Allah disappoint them), were expelled from the areas of control of the Movement.

While it doesn’t seem that al-Shabaab will abandon its pledge of allegiance to AQ, it would not be surprising at all to see fighters defect from the group and announce support for IS. Such an event would be similar to the defection of Tehrik-e-Taliban Pakistan (TTP) leaders in Afghanistan-Pakistan region, which ultimately formed IS’s “Khorasan Province.”

Any split within the group would certainly cause clashes between al-Shabaab and IS supporters, with both sides trying to win the respect and admiration of other jihadists. Yet, these clashes might be even fiercer given al-Shabaab’s history of unforgiving treatment toward those that break away from it. In December 2013, the group reportedly killed Omar Hammami (AKA Abu Mansour al-Amriki), an American Shabaab fighter who had openly criticized Zubeir (then the group’s leader) and defected.

Despite the close timing of these rumours to Shekau’s pledge, we cannot directly compare Boko Haram’s relationship with IS to any such relationship between Baghdadi’s force and Al-Shabaab. Boko Haram, before pledging to IS, was its own jihadi group.

The Shabaab, on the other hand, remains under AQ leadership, giving any such defection its own world of meaning and implications.