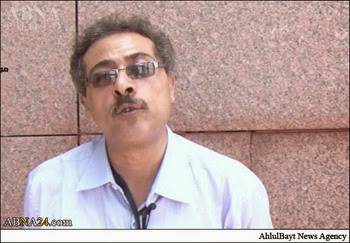 Al-Qaeda’s Yemen affiliate claimed responsibility for the murder of a member of the Revolutionary Committee of Ansarullah movement, the group said Thursday on Twitter.
The claim was made by Ansar al-Sharia, or Partisans of Sharia (Islamic law), which is linked to the Takfiri Al-Qaeda in the Arabian Peninsula (AQAP). Abdul Karim al-Khiwani
A brief statement on Twitter said two militants of the group riding motorcycles opened fire on Abdul Karim al-Khiwani on Wednesday near his home in the centre of Sanaa, before fleeing.
Khiwani was a member of the Ansarullah revolutionaries, whom are also known as Huthis. The revolutionaries flushed out al-Qaeda terrorists out of Sanaa last September.
Khiwani had been also the head of the movement’s media department.
In 2008 he was awarded the Amnesty International Special Award for Human Rights Journalism under threat.
Amnesty has denounced the “despicable killing of a leading journalist and activist,” saying Khiwani had a history of being harassed for his “outspoken journalism and peaceful activism”, and called for a probe.