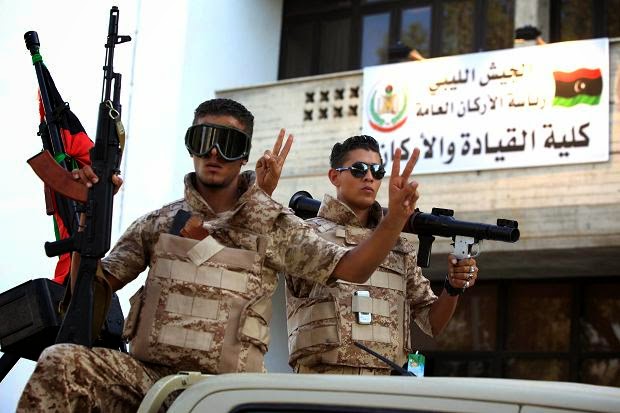 The Libyan army is close to retaking the eastern city of Benghazi from extremist militants, an army spokesman told Asharq Al-Awsat, as the Libyan air force stepped up strikes on Islamist positions in oil-rich areas in the east.

In comments to Asharq Al-Awsat, Col. Ahmed Abu Zeid Al-Mismari, spokesman for the Libyan army, which is affiliated with the internationally recognized government of Prime Minister Abdullah Al-Thani, said: “Army forces are close to finalizing the Benghazi liberation operation.”

“[Despite] the lack of military equipment, army forces are making steady progress,” the army official said.
The internationally recognized parliament in Tobruk has allied itself with the Gaddafi-era army general Khalifa Haftar who last year launched a military campaign, known as “Operation Dignity”, to drive out Islamist militias from Benghazi.

The Libyan army would be able to completely retake the city from Al-Qaeda affiliate Ansar Al-Sharia and the Shura Council of Benghazi Revolutionaries (an alliance of jihadists led by Ansar Al-Sharia) within a few weeks, maintained the spokesman.

Random shells fell on the Al-Laithi district of Benghazi, causing damage to a house and a mosque. There were no casualties, official media reported on Tuesday.

Since the removal of Libyan dictator Muammar Gaddafi in 2011, the North African country has been marred by violence and power struggles. The elected government of Thani fled to the eastern city of Tobruk last year after an array of Islamist militias, known as Libyan Dawn, occupied the capital Tripoli and reinstated the Islamist-majority General National Congress (GNC).

As the two rival governments fight for power and oil share, Islamist groups that have sworn allegiance to the Islamic State of Iraq and Syria (ISIS) continue to spread across the country.

“[Libyan] air force is constantly striking the positions of ISIS and the [Libya Dawn] militias out of its bases in the Brega province in order to provide protection for oil ports,” the military official said.

Meanwhile, at least 12 militants affiliated with the Tripoli-based GNC were killed in clashes with ISIS militants in the coastal city of Sirte on Wednesday.