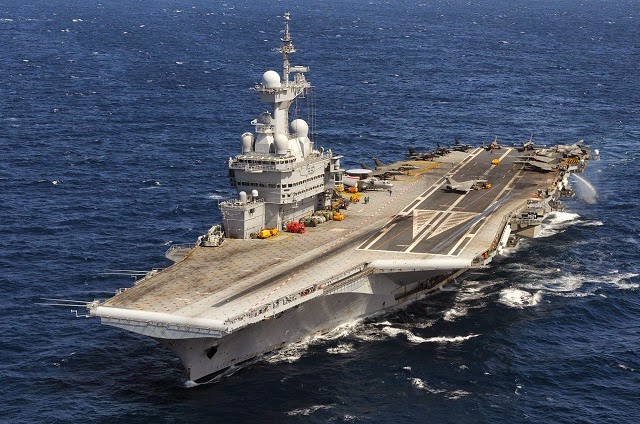 With an allied American aircraft carrier not far away, Rafale and Super Etendard fighter jets catapult off this nuclear-powered symbol of French naval fortitude to attack Islamic State group positions hundreds of miles northwest in Iraq.
The Charles de Gaulle, France’s only aircraft carrier and the flagship of the French navy, arrived in the Persian Gulf last month to help provide additional air power to the U.S.-led coalition conducting airstrikes against the militants who have seized a third of Iraq and Syria.
France has been one of the most active members of the coalition, and is the only nation aside from the U.S. to bring an aircraft carrier to the fight. Its fighters had been flying missions even before the carrier arrived from elsewhere in the region.
For this mission, the Charles de Gaulle is under American operational control and works alongside a U.S. Navy carrier group led by the USS Carl Vinson.
“We have between 15 and 20 flights over Iraqi territory per day,” Capt. Pierre Vandier of the Charles de Gaulle said.
French President Francois Hollande ordered the nuclear-powered Charles de Gaulle to the Gulf just days after Islamic extremists launched a deadly attack on the Paris office of satirical newspaper Charlie Hebdo in January.
France along with Australia, Belgium, Britain, Canada, Denmark, Jordan, the Netherlands and the U.S. are carrying out strikes against Islamic State militants in Iraq. The U.S. and regional allies Bahrain, Jordan, Saudi Arabia and the United Arab Emirates are also carrying out strikes against the group in Syria.
While the U.S. is handling the majority of air strikes in both countries, military commanders in the region insist that the contributions of coalition partners like France are vital to the mission.
American planes were responsible for 1,140 of the 1,619 strikes in Iraq since operations began in August, according to U.S. Central Command.
For France, the deployment is a potent reminder to regional allies of the French commitment to the oil-rich Gulf. French companies such as oil giant Total SA and retailer Carrefour are active in the region, and Gulf Arab states have considered adding French-built Rafale fighters to the own air forces.
In 2009, then-French President Nicolas Sarkozy opened the country’s first Gulf military base in the United Arab Emirates capital of Abu Dhabi, where a branch of the famed Louvre art museum is now being built.