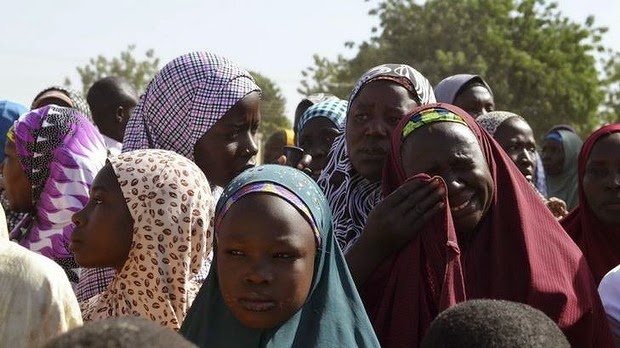 Dozens of Nigerian women who were forced to marry Boko Haram fighters were reportedly slaughtered by their “husbands” before a battle with troops in the northeast town of Bama, multiple witnesses said today.

Five witnesses who recounted the massacres to AFP said the Islamist militants feared they would be killed by advancing soldiers or separated from their wives when they fled the town.

They killed the women to prevent them from subsequently marrying soldiers or other so-called non-believers, they added.

“The terrorists said they will not allow their wives to be married to infidels,” said Sharifatu Bakura, 39, a mother of three.

According to Bakura’s account, which was supported by others, Boko Haram fighters received word of a military assault on Bama, formerly an Islamist stronghold in Borno state.

The insurgents had decided to flee to the nearby town of Gwoza before the troops’ arrival but first decided “to kill their wives so that nobody will remarry them”, she said.

Bukara’s husband was killed by the insurgents four months ago but she was spared from a forced marriage because she was visibly pregnant.

Boko Haram forcibly married scores of women in Bama after seizing it in September. Nigeria’s military announced the recapture of the town on Monday.

Witnesses, who were taken under military protection this week to Borno’s capital Maiduguri, 73 kilometres (45 miles) away, said the killing of women began 10 days before Bama was liberated.

The Islamists said “if they kill their wives, they would remain pious until both of them meet again in heaven, where they would re-unite”, said Salma Mahmud, another witness.

A vigilante who fought alongside the military in the battle to retake Bama, Abba Kassim, said he saw “dozens of women corpses” in the town. While other witnesses reportedly a similarly high casualty figure the numbers were impossible to verify.

Nigeria’s national security spokesman Mike Omeri told AFP he would try to verify the reports while the military could immediately be reached for comment.