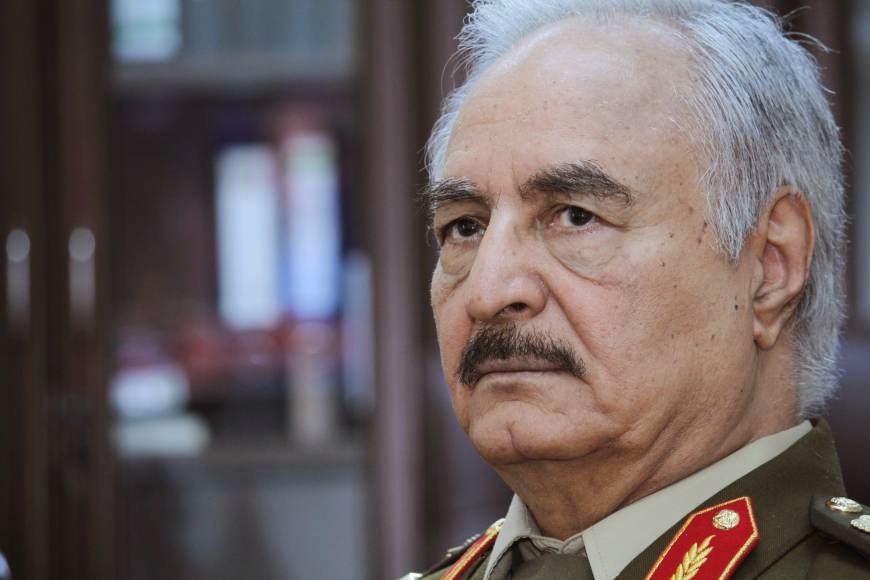 Libyan Army chief Gen. Khalfa Hifter, warned in an interview that Europe will face infiltration by Islamic State group militants from Libya if the West fails to support his forces with arms and ammunition.

The Islamic State group has seized control of at least two cities along Libya’s long Mediterranean coastline and has a strong presence in several others, its first major expansion from its base in Syria and Iraq.

In a sign of the group’s reach, it claimed responsibility on Thursday for an attack a day earlier on a museum in neighboring Tunisia that killed 23 people, mostly foreign tourists.

The militants have been able to expand by taking advantage of the chaos in Libya, where rival governments are fighting for power.

The elected government, which is internationally recognized and which Hifter backs, was driven out of the capital, Tripoli, last year and has been relegated to the small eastern city of Tobruk and other nearby towns. A bloc of Islamist parties, backed by militias, has set up its own government in Tripoli.

Hifter, once a top general of Moammar Gadhafi before turning against him decades ago, is a controversial figure.

Supporters see him as the country’s savior from Islamic militants, while opponents accuse him of seeking to grab power on behalf of supporters of Gadhafi’s former regime, which was ousted in 2011.

He was recently named military chief by the Tobruk-based parliament, and spoke in one of his eastern strongholds, al-Marj, where he has wide tribal support.

He said his forces need backing from the West against the Islamic State group.

“We want weapons and ammunition only. We have the men. The army is increasing in number every day,” he said.

He warned that Islamic State militants will “spread in even the European countries if (the West) doesn’t offer real help to the Libyan people, especially the Libyan Army.” The extremists, he said, “will head with the illegal migrants to Europe, where corruption and destruction will spread just like Libya. But there it will be hard to confront them.”

The number of Islamic State militants has grown to an estimated 7,000 to 7,500, Hifter said, including fighters from African, Arab and Middle Eastern countries trained in Syria.

Libya’s elected government has appealed to the U.N. Security Council to lift an arms embargo and facilitate its request for dozens of fighter jets, tanks and other weapons it says it needs to fight the Islamic State group.
The chaos in Libya is complicated because multiple conflicts are intertwined.

Over the past year, Hifter’s troops have been fighting his main Libyan rivals, the Libya Dawn militia and other allied militias that back the Tripoli-based Islamist government. On Thursday, his warplanes hit Tripoli’s only functioning airport, the Matiga Air Base, damaging the tarmac.

Army spokesman Ahmed al-Mesmari said the base was being used to move militant fighters and weapons, an allegation the Tripoli-based government denies. Troops under Hifter’s command also fought Thursday with Libya Dawn militiamen outside of Zawiya, some 25 miles (40 km) west of Tripoli.

The yearlong violence has displaced hundreds of thousands of Libyans, and has prompted the mass flight of foreign workers and the closure of embassies.

At the same time, the Islamic State has entered the fray, taking control of the coastal cities of Darna and Sirte and spreading its influence to others, including the western city of Sebratha, the most active launching point for illegal migrants heading to Europe.

It has carried out attacks targeting hotels housing foreigners in Tripoli, overrun oil fields and kidnapped foreign workers. Last month, it released a video of a mass beheading of Egyptian Christians kidnapped from Sirte.

The Islamic State group is fighting both rival governments: It is battling Libya Dawn outside of Sirte and has been targeted by Hifter’s warplanes in Darna, prompting retaliatory suicide attacks by the extremists against the elected government.

In Libya’s second-biggest city, Benghazi, Hifter’s forces have been fighting Islamic State fighters and a mix of other Islamic militant groups for months in battles that have repeatedly seen gruesome beheadings of his soldiers by Islamic State militants.

Hifter accuses the Tripoli government and its allied militias of helping the Islamic State extremists, a claim they deny. He also accused Qatar and Turkey of facilitating transit of Islamic State fighters to and from Libya, a claim both countries deny.

Hifter said the Islamic State group has set its sights on Libya because “it is an oil country, with a small population, a vast country (where it is) easy to spread . . . Libya’s resources of oil, gas, gold and uranium could be used (to finance) their movement.”

He said his forces are making progress against the militants in Benghazi.

“Benghazi is not simple,” he said. “We tried to push them out of the city and we curbed most of them.”
But in addition to the guerrilla fighting, the extremists are resorting to what he called a “war of tunnels” in Benghazi, in which government and residential buildings are being connected via underground tunnels.
“We can’t declare that the city is 100 percent secure . . . until after searching all the buildings, especially the government buildings,” he said.

The battle against the militants has brought Hifter back into prominence in Libya after a long and controversial career.

In the 1969 coup that toppled Libya’s monarch and brought Gadhafi to power, Hifter provided crucial backing for Gadhafi by taking over Matiga Air Base. He rose in the ranks to become head of Gadhafi’s military, but was tainted by a disastrous defeat in a war against neighboring Chad in the 1980s. He was captured and, when the war ended in 1987, he defected, turning against the Gadhafi regime and eventually fleeing to the United States.

Living in exile in Virginia, he became commander of the armed wing of an opposition group, the Libyan National Salvation Front, and orchestrated a couple of failed coup attempts against Gadhafi before breaking with the group.

In interviews with Arab media in the 1990s, he described himself as building an armed force with U.S. assistance to topple Gadhafi and his associates.

A 1996 Congressional Research Service report suggested that the United States provided money and training to the National Salvation Front.

Hifter returned to Libya during the 2011 civil war that led to Gadhafi’s ouster and death.

In earlier interviews, including one with AP last year, he insisted that he does not seek power for himself but rather a road map in which Libya will be governed by a presidential council for a year until new civilian leadership emerges.

“If we wanted power, nothing would prevent us. But we want a civilian state,” he said at the time.

However, during Wednesday’s interview, Hifter didn’t outright deny aspiring to a future political role. Asked if he will run should a presidential election be held in Libya, he gave only a vague response.

“We are not in a situation to talk politics. When the time of politics comes, that will be the time to talk” he said.
“Our eyes are all on the terrorists, wherever they are,” he added.