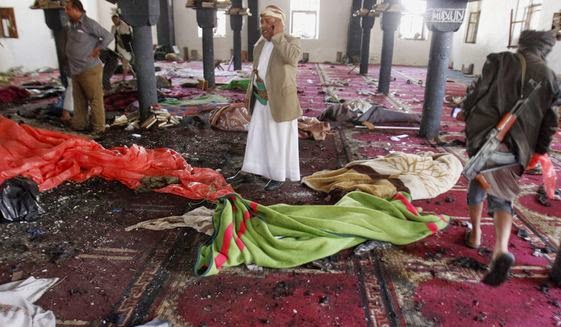 Initial descriptions by people at the mosques indicated that there may have been a blast inside one of the buildings, followed by two car bombs.

The Houthi-controlled television station Al-Masirah reported that an estimated 137 people had been killed, though the number could go higher in the aftermath of the attacks.

Although long considered a staunch U.S. ally in the region, Yemen has descended into increasing violence and civil war among the government, Houthi minority militants and al Qaeda terrorists.

The mosque bombings come a day after a Houthi jet fired missiles at the palace where the deposed president was staying, though no one was reported to be injured.

Yemen’s state-run news agency said a prominent Houthi religious leader, Murtatha Al Mahathwari, was killed in the attacks. Fighting was also reported to have broken out in other cities around the nation, including the Houthi-controlled Saada and port city Aden.

The attacks come two days after a terrorist attack on a Tunisian museum left at least 20 people dead. The Islamic State terror group claimed responsibility for attacking the North African democracy.But security experts said Friday that the attacks in Yemen are more likely to have been carried out by another terrorist group: al Qaeda. The Sunni terrorists have vowed to destroy the Houthis, who are Shiite.